This really shouldn’t be a surprise to anyone who’s done it: You are just no good at texting and walking.

While you might do OK at the reading and typing part, your preoccupied brain isn’t paying enough attention to what’s going on with your feet. It’s such a hazard that Honolulu last month adopted an ordinance to outlaw smartphone use by pedestrians crossing streets. Now Stamford, Connecticut, may become the second U.S. city this year to combat the problem with fines. 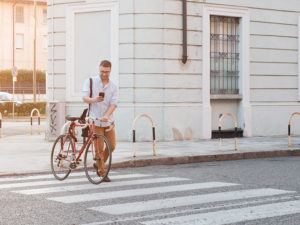 “The point is, if you’re on the street and not paying attention, it’s dangerous,” said Stamford Mayor David Martin.

That seems straightforward enough, and there’s research showing texting can result in what’s called distracted walking. John Zelinsky, a member of the Stamford Board of Representatives, said he’s confident a proposed cell-phone crosswalk ban will be adopted and that once text-happy citizens see cops issuing citations – right now the idea is for the fine to be $30 per violation – “they will think twice.”

Most U.S. states already ban texting by drivers (to avoid incidents like this). But there isn’t unanimous support for dinging foot-travelers in a bid to improve safety. The city council in Honolulu heard from residents who testified about enforcement hurdles and the impact on tourists and complained about overreach. As one person said in a written comment: “Why should the government dictate where I look?”

Some skeptics wonder if distracted-walking laws are unfair, or even counterproductive. “Sure, people can walk into a risky situation, but that implies that pedestrians are often at fault,” said Jonathan Matus, chief executive officer of Zendrive, a company that uses smartphone sensors to track driving behavior. “I feel like legislating pedestrian distraction might give aggressive drivers a scapegoat to blame fatalities on the road with, and I’m not excited about that aspect.”

Safety experts point to the numbers: U.S. pedestrian deaths have been on the rise, with 5,376 in 2015 and nearly 6,000 last year, the most in two decades and up 22 percent from 2014, according to data compiled by the Governors Highway Safety Association for a recent report. (The 2016 total is a projection based on numbers from the first half of that year.)

There are no statistics to show whether texting played a role in any of the fatalities, but “when you keep records for 40 years and see two consecutive years with the back-to-back largest, that tells me there was a game changer,” said Richard Retting, a former traffic safety commissioner for the New York City Department of Transportation who worked on the report. “I don’t think it’s a leap of faith when you look at the increase in cellphone usage.”

The Honolulu law will go into effect in October. Fines will start at $15 and go as high as $99 for multiple violations. There are a few details to work out before the Stamford Board of Representatives will take its vote, including what burdens enforcing the ordinance would put on the local police force.

Other cities have tried different approaches, with the Los Angeles Police Department launching a “look up, phone down” public information campaign and Augsburg, Germany, embedding traffic signals into sidewalks so people hunched over mobile devices can spot them.

Laws, though, can change behavior, according to Retting. “It’s not so much about a draconian measure that has cops hiding behind lampposts, waiting to give people $200 tickets for looking at their phones,” he said. “It shifts what the social norm is in terms of what’s safe.”