The smell of jet fuel is fairly common in the passenger cabin when your plane is preparing to taxi. Far less so is the aroma of dirty socks, rancid cheese, or a wet dog—the typical unpleasant notice that engine oil vapors have seeped in, too.

These smells are usually found in jet engine “bleed air,” which is outside air that’s been shunted from the engines into an air conditioning system and then to the cabin. In various systems—cabin pressurization, water-tank storage pressure, even heating to dissipate wing ice—this air is highly useful to the plane’s operation.

Yet, when engine seals deteriorate, the bleed air can mix with fumes from high-temperature synthetic engine oil. At high-enough concentrations, flight crews and passengers can grow ill, forcing pilots to divert to the closest airport. The latest publicly known incident was Aug. 2, when a Florida-bound JetBlue Airways Corp. flight diverted to Oklahoma City, where several people were treated for breathing difficulties. In October 2016, a British Airways Airbus A380 bound for London from California diverted to Vancouver after all 25 crew members became ill. Cabin fumes were suspected in that case. 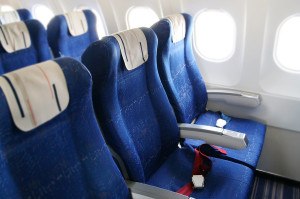 Given the potential for catastrophe, these “toxic fume events” have spurred airline labor organizations to lobby for passage of a U.S. Senate measure called the Cabin Air Safety Act. The legislation, from Senator Richard Blumenthal, a Connecticut Democrat, would require the Federal Aviation Administration to devise a standard form for incident reports from pilots, flight attendants and maintenance technicians. The agency would then publish a quarterly tally, require annual training so flight crews could identify fume events, and make airlines install carbon monoxide sensors fleetwide.

Blumenthal’s proposal was offered in June as an amendment to legislation reauthorizing the FAA, and co-sponsored by two other Democratic senators. A similar measure on fumes is pending in the House, proposed by Representatives Peter DeFazio, a Democrat from Oregon, and Rick Larsen, a Democrat from Washington State.

Existing FAA rules on fume event reporting apply to airlines as entities, while the proposed law would cover pilots, flight attendants, and maintenance personnel individually.Representatives of the FAA and the industry didn’t comment directly on the cause of fume events, the increased safety and reporting demands of airline employees, or the rules laid out in pending Congressional legislation. Gregory Martin, a spokesman for the FAA, said the agency received reports from carriers of 98 fume events in 2015 out of almost 9 million flights. Kathy Grannis Allen, a spokeswoman for the industry lobbying group Airlines For America, said in an email that the FAA told Congress in 2015 that the “risk of these issues” is “extremely low.”

The passenger jet engine-air design dates to the 1950s and has been used in virtually all commercial airliners save the Boeing 787, which uses electrical power for air conditioning and other tasks of bleed air. Boeing said this approach allows the engine to operate more efficiently and uses all the high-speed air to generate thrust.

The frequency of these fume events is difficult to assess, but estimates run to as many as 2.6 per day. The Allied Pilots Association (APA), which represents American’s pilots, has cited as many as 20,000 fume incidents over the past decade, or about five per day.

One reason for the rough estimates is that each carrier typically has different procedures on how pilots and maintenance technicians characterize and then address a fume issue, said Dennis Tajer, a spokesman for the 15,000-member APA.

“It’s all done on a parochial basis, as each airline sees an issue,” said Tajer, a Boeing 737 captain who said he experienced a fume event earlier this year while commanding a flight to Chicago. “We took off from Orlando and just after liftoff … I looked at my first officer and she looked back at me holding her hand up to her nose,” he said. Tajer said he strapped on his oxygen mask and considered returning to the airport but the fumes dissipated above 7,000 feet and they decided to continue. A similar odor returned during the descent into Chicago and the 737 was removed from service, he said.

“Most of us will never experience a serious fume event,” the union said last fall in its member newsletter, likening these to the rarity of jet engine failures inflight—a common scenario in pilot training but unusual in commercial aviation. “However, it is incumbent upon us to know how to react.”

The issue has led to at least two lawsuits against Boeing Co. brought by five Alaska Air Group Inc. flight attendants who fell ill while working on Boeing 737s. In some cases, the employee is unable to return to work, according to the lawsuits, which were filed in Chicago.

“Most Americans go to work with the expectation of breathing clean air, but until we achieve better standards for cabin air quality, flight attendants don’t have this guarantee,” Sara Nelson, president of the Association of Flight Attendants-CWA, the largest U.S. attendants’ union, said in a statement. “When your workplace is 30,000 feet above the ground, you can’t step outside for a breath of fresh air,” added Bob Ross, president of the Association of Professional Flight Attendants, which represents 26,000 attendants at American.