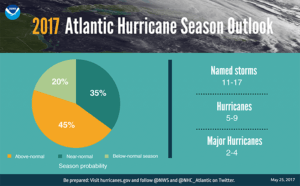 “As a Florida resident, I am particularly proud of the important work NOAA does in weather forecasting and hurricane prediction,” said U.S. Secretary of Commerce Wilbur Ross. “These forecasts are important for both public safety and business planning, and are a crucial function of the federal government.”

These numbers include Tropical Storm Arlene, a rare pre-season storm that formed over the eastern Atlantic in April.

“The outlook reflects our expectation of a weak or non-existent El Nino, near- or above-average sea-surface temperatures across the tropical Atlantic Ocean and Caribbean Sea, and average or weaker-than-average vertical wind shear in that same region,” said Gerry Bell, Ph.D., lead seasonal hurricane forecaster with NOAA’s Climate Prediction Center.

Strong El Ninos and wind shear typically suppress development of Atlantic hurricanes, so the prediction for weak conditions points to more hurricane activity this year. Also, warmer sea surface temperatures tend to fuel hurricanes as they move across the ocean. However, the climate models are showing considerable uncertainty, which is reflected in the comparable probabilities for an above-normal and near-normal season.

The 2016 season was the most active since 2012, with 15 named storms, including 7 hurricanes and 4 major hurricanes.

NOAA will update this outlook in early August, just prior to the peak of the season.

NOAA also issued seasonal hurricane outlooks for the eastern Pacific and central Pacific hurricane basins. An 80 percent chance of a near- or above-normal season is predicted for each region. The eastern Pacific outlook also calls for a 70 percent probability of 14 to 20 named storms, of which 6 to 11 are expected to become hurricanes, including 3 to 7 major hurricanes. The central Pacific outlook calls for a 70 percent probability of 5 to 8 tropical cyclones, which includes tropical depressions, tropical storms and hurricanes.