A polar vortex is blasting cold air across the northern half of the U.S. this week – and by Christmas, it’ll be warm enough to barbecue in Washington.

Just last week, models had this polar vortex – a term loosely used to describe extremely cold air spilling out of the North Pole – lasting deep into December. By Monday, outlooks had turned warmer. While a similar chill brought record low temperatures to parts of the U.S. and froze most of the Great Lakes just two years ago, this one’s having a hard time sticking around as unpredictable weather patterns jostle for control.

At least two weather phenomena may be to blame for the volatile weather, according to meteorologists: La Nina holding sway in the Pacific and a weather fluctuation known as the Madden Julian Oscillation. Together, they promise to keep forecasters on their toes by delivering bursts of both cold and warmer-than-average temperatures this winter.

The weather is “a mess,” said Matt Rogers, president of the Commodity Weather Group LLC in Bethesda, Maryland. “We will be dealing with these swings a lot this winter.”

Such extreme bursts of cold from the polar vortex have in the past sent natural gas futures surging, grounded thousands of flights and shut hundreds of retail stores. One essentially froze U.S. gross domestic product growth in the first quarter of 2014 by keeping shoppers at home and preventing builders from breaking ground. 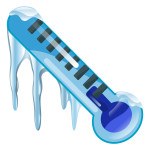 This year’s chill, though, is going up against La Nina, which is notorious for producing sharp temperature swings, according to Rogers. The phenomenon – defined by a cooling of the equatorial Pacific Ocean’s surface that touches off a change in atmosphere patterns – can overpower more common winter conditions that make the western U.S. mild and the eastern half of the nation cold.

It’s essentially a mix of clouds, rainfall, winds and pressure that crosses the tropics every one to two months. This one’s weakening a ridge of high pressure across the ocean’s northern reaches that was helping shove cold air from the Arctic into North America, Ventrice said.

When that happens, it “allows for a flip” between cold and warmer weather, he said.

Temperatures in Washington were forecast to reach a low of 15 degrees Fahrenheit (minus nine Celsius) on Thursday, the National Weather Service said. They’ll peak at 58 degrees on Christmas day, 14 above average, according to Accuweather.

The volatility has already thrown the natural gas market through a loop. Futures for the heating fuel rallied to a two-year high last week as frigid weather forecasts fueled speculation that the U.S. would eat away at supply glut to keep warm. Prices plunged as much as 7.3 percent on Monday after models surfaced over the weekend that showed milder weather returning.

For a look at how the gas market reacted to shifting weather forecasts, click here.

Gas-related stocks were on board for the ride Monday. Drillers of the fuel including EQT Corp. and Southwestern Energy Co. plunged.

To be sure, warmer weather is still a ways off. Temperatures may first drop into the teens or single digits Fahrenheit from the Great Lakes to the East Coast this week, said Shunondo Basu, a meteorologist and gas analyst with Bloomberg New Energy Finance in New York. The cold may boost so-called heating degree day values, an indication of how much energy’s needed to heat homes and businesses.

There’s also a chance that snow blankets the northern Midwest and upper Great Plains through Christmas, he said Monday.

“The biggest cold outbreak is Thursday and Friday,” Rogers said. “It is going to be brutal.”