This year, extensive flooding has already affected parts of Texas and Louisiana. With more rain producing floods forecasted for the southern part of the U.S. this spring, the likelihood of disaster fraud increases.

Disaster-related fraud affects auto, homeowners and commercial lines of insurance. Fred Lohmann, NICB director of operations for the Southwest Region, explained the types of fraud associated with flooding in a podcast interview with Claims Journal.

Recent flooding in Houston, Texas, caused an estimated $14 billion in damage. Last year, the NICB reported that nearly 10,000 insured vehicles were damaged by flooding in the state. Lohmann said he expects about the same number of damaged vehicles in this latest round of flooding.

He discussed how flood damaged cars are totaled out as salvage and then resold to unsuspecting victims.

“We typically see total loss claims for vehicles that have gone under the water,” said Lohmann, who is based in Irving, Texas. “Houston is a coastal city, so there are a lot of bayous. When you get heavy rains, as we experienced this spring, that water comes up very rapidly. It ends up trapping people where they can’t get out, and those vehicles end up going underwater.”

When fraud is involved, flooded vehicles are cleaned up, purchased at salvage and then sold to unsuspecting buyers at used car facilities. Lohmann said subsequent problems involving a vehicle that has been submerged underwater includes rusting and issues with electronics and computer systems – both of which are susceptible to corrosion.

Consumers and insurers can use the NICB VINCheck website and other systems, including CarCheck and the National Motor Vehicle Title Information System (NMVTIS ), to check to see if a used car title is branded as salvage. 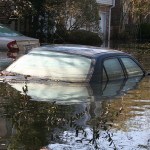 “That alerts consumers that, hey, this may not be a safe vehicle to be driving on the road,” said Lohmann. “The salvage companies work very closely with the auto…insurance companies in the U.S. to ensure that those vehicles, when they’re salvaged the title’s properly branded.”

That information is also used by the insurance industry, NICB and law enforcement. A state’s department of motor vehicles will also brand flooded vehicles as a total loss, and in some cases will actually denote that it’s a flood loss, he said.

“We…have investigated some cases in the past where vehicles were intentionally driven into low lying areas in anticipation of the flood event,” said Lohmann. “We noticed during Hurricane Ike that struck the Texas coast some years back, I had an agent that was actually observing vehicles towing boats to Galveston Island prior to the storm making landfall. Most people are leaving the island to safeguard their property, yet we were seeing cases where they were actually bringing the boats out to the island. We suspect that it was to basically have them impacted adversely by the storm and then potentially make insurance claims.”

Both hard and soft fraud occur after weather disasters, he said.

“When you’re dealing with that many vehicles, there’s always the possibility that people are going to take advantage of a natural disaster for their own benefit. Then, of course, you’ve always got the group of people with a little larceny in their heart that see those vehicles being sold at salvage as an opportunity to make money at somebody else’s expense,” Lohmann explained.

Homeowners’ Fraud After a Weather Catastrophe

Though most flood-related damage to a home will not be covered by a homeowners’ policy, policyholders may still file claims.

“It’s important that the insurance companies go out and investigate the claim to make sure that they can properly deny that claim if in fact it was rising water that attributed to that loss, as opposed to broken pipes and things of that nature,” explained Lohmann.

Sometimes an unrelated loss will occur during a flooding event. He offered an example that occurred during Hurricane Katrina. A home was flooded and catches on fire despite the fact that the electricity was off. There was no natural gas feeding into the home either.

“How did the house catch on fire? It was one of those situations where the homeowner knew they didn’t have flood insurance. This wasn’t going to be a covered loss. However, fire is a covered loss and then the home was intentionally set ablaze in the hopes of trying to collect on an insurance policy,” explained Lohmann.

After a catastrophic loss, people can become desperate which results in all kinds of insurance fraud.

“These are huge economic losses that they’re looking at and suffering with, and sometimes those people make very, very poor life choices and do things that are illegal in the process,” he said. “There are people…that look at these catastrophic events as opportunities to make money at other people’s expense.”

Lohmann said Texas has had a difficult time dealing with nefarious contractors that come in in the aftermath of catastrophic storms looking to exploit overwhelmed insurers and victimize homeowners.

He cited the late December tornadoes that occurred in Wiley, Texas, which caused billions of dollars in losses. More than 20,000 structures were damaged as a result of the storm. Contractors came in from all over the country, Lohmann said.

Contractors swoop in to a disaster affected area and offer to waive deductibles, he explained.

“In some cases they’ll take money upfront from the homeowner, from the policyholder, and then they’ll leave. They’ll take off and none of the work will ever get done,” said Lohmann.

To combat the problem, the NICB conducted training for criminal investigators and special agents in Texas on roofing materials and roofing systems. It included a one on one basic course on roofing structures, roofing materials, types of roofing and what it takes to repair or replace a roof.

“The goal was to train these personnel so that when a catastrophic event hit Texas we could send those staff members into that impact zone to work with local authorities, and to assist them in protecting their citizens from being victimized a second time by unscrupulous contractors,” he explained.

The training was completed just three weeks prior to the December 2015 tornado. A response team made contact with the civic leaders in the area and educated them on the types of insurance fraud scams their citizens could be subject to in the aftermath of a catastrophe.

“Those cities took the additional actions to protect their citizens by requiring that all contractors operating in the city obtain a solicitors permit and that they also obtain a building permit to do any repairs on homes or to replace a roof,” he said.

The code enforcement and building departments work closely with the NICB and the state’s department of insurance investigators, as well as the police department to patrol the areas impacted by the storm. Local authorities enforced city ordinances and took steps to ensure the contractors had a bond or general liability insurance.

“When there were situations found where a contractor was out soliciting without a permit enforcement action could be taken. Same thing with a contractor that was maybe doing repairs or replacements of roofs without a building permit, the work was ordered to be stopped until such time they complied,” he said.

Besides educating consumers on the ground, the NICB purchased a number of public service announcements in the Dallas-Fort Worth area to educate consumers on potential scams involving contractors.

“To date, we’ve had very few questionable claim referrals coming in from that storm,” Lohmann said. “I think that it was really a great example of team work between the public and private sector, working with local communities, leadership within the communities to protect the citizens. It had a really good outcome.”

With the extensive flooding and hail that has hit Texas in recent months, there is the potential for insurance fraud, he said.

“Anytime we have an event…we have to be very vigilant because we recognize that there are those that would take advantage of the opportunity to commit insurance fraud. The way we attack that is working collaboratively with our law enforcement partners, our local communities and in educating the public to the scams that do occur,” Lohmann said.

Adjusters concerned that a claim may involve disaster fraud can refer to the NICB red flag indicators which can be printed, downloaded or integrated into an insurer’s claims management system.

Lohmann said the indicators may alert a claims adjuster investigating a claim to ask more questions or conduct further investigation in order to be certain that they can explain any problems identified in the investigation of the claim.

“Those indicators are there to assist the claims professional. It’s a guide. It’s not conclusive proof that the claim is fraud. It’s just an indicator of potential red flags that could end up proving at some point through their investigation that there was fraud in the insurance claim,” explained Lohmann.