While Katrina impacted parts of Alabama, Florida and Mississippi, its most widespread destruction occurred in Louisiana in and around New Orleans. After making landfall on August 29, 2005, Katrina’s heavy rainfall and significant storm surge caused breaches in a number of the levees protecting New Orleans from Lake Pontchartrain. As a result of those levee failures, roughly 80 percent of New Orleans was underwater by August 31.

In terms of property damage, Hurricane Katrina was the most costly on record with insured losses estimated at over $41 billion. Part of that figure came from insurance claims on more than 300,000 vehicles damaged or destroyed by Katrina—vehicles that presented an attractive opportunity for fraud. 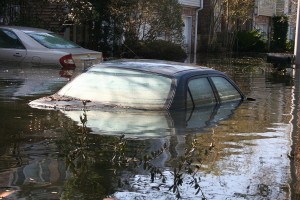 Recognizing the unprecedented number of vehicles that were flooded or otherwise damaged from Katrina, NICB dispatched teams to the region and established the Gulf Coast Task Force (GCTF) which operated from two locations: Baton Rouge, La. and Mobile, Ala. Over the next several months, NICB personnel from all over the United States were rotated through the GCTF where they worked side-by-side with state and local law enforcement officers in identifying and cataloging the thousands of damaged vehicles that littered every part of New Orleans and Mobile—and most points in between—in Nature’s random display of destruction.

As the vehicle inventory process took shape, GCTF personnel had some time to pursue allegations of insurance fraud, which NICB was receiving on its hotline almost from the moment Katrina made landfall. Even as search and recovery efforts were underway, some saw opportunity to exploit tragedy for personal and illicit gain. NICB investigated everything from bogus claims for flooded vehicles that were nowhere near the storm area to yachts being scuttled by their owners, but blamed on Katrina so they could collect an insurance payoff.

The birth of VINCheck

To prevent unsafe flood vehicles from entering the commerce stream disguised as legitimate used vehicles, NICB created the “Katrina Flood Vehicle Database.” This database was populated with the vehicle identification numbers (VINs) of every Katrina-damaged vehicle that was insured by one of NICB’s 1,100 member insurance companies. Although initially developed to more efficiently share data with law enforcement, state fraud bureaus, motor vehicle departments and insurance companies, NICB realized that allowing consumers to have free access to this data was the best way to help them protect themselves from making an expensive—and potentially life-threatening—flood vehicle purchase.

Within two months of Katrina’s landfall, the Katrina Flood Vehicle Database was opened to the public. As this free consumer protection grew in popularity and usage, its name evolved into VINCheck. With the new name and with the cooperation of participating insurance companies, VINCheck not only identified flood vehicles, but any vehicle that had been declared a total loss, salvage, or was an unrecovered stolen vehicle.

Since its creation, VINCheck has been the most visited page on the NICB.org website. From January 1, 2009, through December 31, 2014, more than 5 million VINs have been searched through VINCheck. From those queries, 48,442 theft records and 507,110 salvage records were identified meaning that VINCheck may have saved thousands of innocent consumers from experiencing significant financial losses—or worse.

The hurricanes of 2005, of which Katrina was the Queen of Destruction, challenged all levels of government, as well as state and local law enforcement, the insurance industry and disaster relief agencies. The lessons learned from Katrina helped government and non-government officials deal with another mega storm when 2012’s Sandy devastated the Eastern Seaboard and other inland areas.

Each day this week the National Insurance Crime Bureau (NICB) is releasing segments of a five-part documentary video that provides first-hand recollections of NICB employees and law enforcement personnel as they reflect on their roles in the aftermath of Hurricane Katrina.