Andrew J. Heymsfield has an affinity for thunderstorms, particularly those nasty spring-born storms that darken the plains and drop hailstones similar to millions of tiny ice bombs, leaving crushed crops, car hood dings and dimples, and billions of dollars of damage in their wake.

Visit the senior scientist’s offices at the National Center for Atmospheric Research in Boulder, Colorado, and you’ll find one of his prized possessions is a cast replica of the largest hailstone ever recorded – a nearly 2-pound monster measuring 18.5 inches that fell July 23, 2010, in the small central South Dakota town of Vivian. The real one resides in a laboratory freezer down the hall, the Rapid City Journal reported.

“I’m interested in all aspects of ice phases, snow, precipitation, and hail just happens to be one of them,” says Heymsfield, who first began studying the icy phenomenon in 1978. 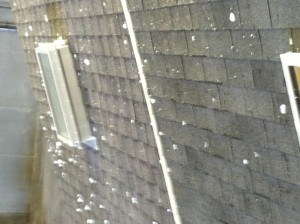 For the past few years, his research center has been working in tandem with the Insurance Institute of Business & Home Safety, a consortium of insurers seeking ways to strengthen homes, businesses and communities and reduce the estimated 9 million claims for hail losses totaling more than $54 billion they received from 2000 to 2013.

And, thanks to studies by the insurance institute and armored airplanes that have penetrated hailstorms for more than 30 years collecting data for studies conducted by the South Dakota School of Mines & Technology in Rapid City, scientists are gaining a greater understanding of how hail is produced, and what can be done to mitigate the billions of dollars in damages it does to crops and property.

At the outset, Heymsfield says he was astonished that previous studies used outdated mathematical models to determine the characteristics of hail and to forecast thunderstorms that might produce hail. One such study widely used to calculate the relationship between the size of hail and the speed at which it falls was conducted in the 1960s using data collected in the 1920s, he said.

“The thing that really surprised me was that there was a kind of disconnect between the insurance industry and the science from standpoint they perhaps took things from some very old results, but not things we had learned more recently,” Heymsfield explained. “Now we are starting to look at the properties of hail in a more realistic way.”

Ian Giammanco, a meteorologist and Heymsfield’s counterpart at the institute’s state-of-the-art research facilities in Richburg, South Carolina, 45 minutes south of Charlotte, said the studies are intended to not only identify the properties of hail, but to replicate storm conditions with the goal of improving the resiliency of products used in construction that might reduce damage from the icy projectiles.

“It’s an exciting time in hail research,” said Giammanco, whose wife, Tanya, is a fellow scientist working on the project. “The goal is to make measurements of hail, multiple dimensions, evaluate shape, weigh hail and understand how size and mass change as hailstone shapes change, which plays an important role in aerodynamics.

“That makes a difference in how fast hail falls and subsequently, the damage inflicted when it hits roofs,” Giammanco added.

Working in institute laboratories that include 3-D scanners and printers, as well as a massive hail-making machine, Giammanco and his associates this month for the first time replicated individual hailstones, then measured strength and density in their effort to develop stronger building materials more resistant to hail damage.

The scientist said the studies had found that, while hailstones smaller than 1 inch in diameter tended to be more spherical, larger hailstones became less round as they got bigger, and larger hailstones can even feature spikes and other unusual shapes.

“On the strength side, small stones typically are the strongest,” Giammanco added. “The strongest took 3,000 psi (pounds per square inch) to fracture it, which is somewhat amazing when you consider the typical car tire is inflated to 38-40 psi.”

While smaller hailstones might take 10 minutes to be produced in a thunderstorm, larger hailstones take an arcing path to the ground, collecting super-cooled water and other bits of atmospheric ice and even colliding with other hailstones on their journey earthward, he said.

“It’s mind-blowing to consider the size of some hailstones a thunderstorm can produce, getting bigger and bigger, and the fact that 100 mph winds are needed to suspend those giant hailstones in the atmosphere for the 20 to 30 minutes they might be up there,” Giammanco added.

Andy Detwiler, a research scientist associated with the School of Mines for nearly 30 years, said he is proud the Rapid City institution’s work is now playing such an instrumental role in studies designed to understand hail and reduce damages from thunderstorms.

Noting South Dakota is one of five states most prone to hail storms, Detwiler said the Mines studies using an armor-plated T-28 with a bullet-proof canopy for more than 30 years, and a modified Air Force A-10 more recently, have led to a greater understanding of what actually occurs inside a hailstorm.

“Our work began with a grant from the National Science Foundation in 1968,” said Detwiler, whose doctorate is in atmospheric sciences. “At that time, there was no way to get measurements of storms and this was an attempt to do that.”

Praising Heymsfield’s hail studies and subsequent scientific papers as “groundbreaking,” Detwiler said aircraft used by the School of Mines and the data they helped produce were just two tools in the arsenal scientists are using to understand our natural environment.

“We’re trying to deal with the environment as effectively as we can and preserve and protect our standard of living,” he said. “The airplane is just one tool. It takes airplanes, scientists, data and computer modeling to make the big picture understandable.”