It has been a busy week. Again, not surprisingly, my article last week entitled “The Emerging Hail Risk: What The Hail Is Still Going On and Getting Worse” generated a lot of discussion. Mostly positive (even Chip Merlin has nice things to say again), but also a fair amount of negative. That’s not surprising, as I’m not shy in stating that my objective is to see an end to the abuses, fraud and outright illegal conduct that have sadly become the norm in the hail lawsuit feeding frenzy.

That scares some of the folks who are making a lot of money right now. So vocal opposition is not surprising.

But I did find surprising that some questioned whether the problem was as bad as I portrayed.

It is. And here are some statistics. 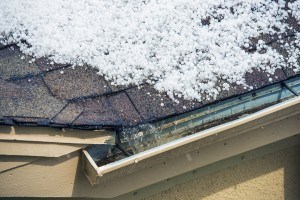 And things aren’t slowing down much. In the first three months of 2016, 73 hail damage lawsuits were filed in Tarrant County.

We are on track to see almost 7000 hail damage lawsuits in Texas this year.

Here’s an interesting fact. One lawyer (in a two-lawyer firm) filed 27 hail damage lawsuits in a single day. Yes…27.

And the vast majority of the 1700 lawsuits were filed by the same dozen or so law firms.

After over three years deep in the trenches dealing with all of these issues, the abuses are readily apparent. And each abuse has a readily apparent solution. These solutions to seven common abuses will help to restore balance:

Abuse: When a consumer buys a television from Best Buy that turns out not to have the features promised by the salesman, the consumer sues only Best Buy. The salesman is seldom a defendant. When a consumer hires a contractor who puts on a bad roof, the consumer sues only the contractor. The individual workmen are seldom named as defendants. Why is it then that when a consumer buys insurance and its claim is not paid, the consumer always sues the adjuster? There is only one answer – to destroy diversity jurisdiction and stay out of Federal Court. The hail lawyer wants to keep the matter in state court, where it is more difficult for the insurance company to obtain dismissal of meritless lawsuits and more likely that the court will push the matter to settlement. There is no legitimate argument to the contrary. In fact, the truth is exposed by the fact that claims against the adjuster are never actively pursued in the litigation and in many cases the adjuster is dismissed in exchange for an agreement by the insurance company not to seek removal.

Solution: Claims against individual adjusters should not be allowed. To ensure that the consumer still has a right to address improper conduct by an adjuster, the Texas Insurance Code should be clarified to make it absolutely clear that an insurance carrier is responsible for the conduct of adjusters acting on its behalf in the claims process. If a case against an out of state insurance carrier is properly removable to Federal Court, then the hail lawyers will then think twice before filing boilerplate and often meritless lawsuits that they know will be heard by a federal judge. In fact, read the recent opinions being issued by Judge Alvarez in the Southern District of Texas (which includes Hidalgo County). It is apparent she is growing increasingly impatient with the hail lawsuits pending in her court.

2. Allow Insurance Companies to Obtain a Release When a Claim Is Paid

Abuse: It is presently considered a bad faith practice for an insurance company to ask for a release in resolving an undisputed claim. A release is not allowed even when the claim is paid on the building owner’s loss measure and resolved amicably. Without a release, a canvasser can step in long after the claim is resolved and induce the building owner to pursue litigation with promises of more money.

Solution: An insurance company should be allowed to obtain a release when it resolves an undisputed claim. A standard form release should be adopted that protects the insurance company from lawsuits drummed up by the door-to-door canvasser model, while protecting the building owner by allowing it to reopen the claim process (as opposed to filing a lawsuit, see #3 below) for additional damage components that were unknown and inherently undiscoverable at the time the release was given.

Solution: Existing pre-litigation notice requirements must be strengthened. Simply providing for “abatement” of a lawsuit filed without proper notice is meaningless. The hail lawyers just wait out the sixty day abatement and move on. Instead, lawsuits that contain new damage components not previously included within a claim submission should be subject to dismissal with a mandatory award of attorneys’ fees to the insurance company. As a prerequisite to litigation, the building owner must provide the insurance company with a signed statement setting forth the additional damage components and estimated claim measure. The insurance company then should be given a reasonable period of time to adjust the claim and provide a claim decision. The building owner thereafter have an opportunity to respond to the claim measure. Suit can be filed only after that this process has taken place.

Abuse: It is illegal for a contractor to waive, absorb, rebate or otherwise not collect a deductible from the building owner. Regardless, contractors do it all the time. They rely on an old Attorney General opinion to support their practice. The present statute needs to be strengthened to clarify this prohibition. Building owners should only file an insurance claim when they are prepared to pay their agreed deductible portion of the total damage amount. Perhaps they will then think twice about whether there is really damage to their property and an insurance claim is warranted. The days of the “no cost roof replacement” must come to an end.

Solution: Amend the current statute to clarify that waiving of deductibles is illegal.

Abuse: Public adjusters and canvassers roam neighborhoods sometimes two or three years after a storm event. Late reported claims are becoming commonplace. When a claim is reported long after the loss date, it is typically more difficult for the insurance company to establish when the reported damage actually occurred. Additional consequential damage has also often occurred.

Solution: Hail and wind damage, along with all other types of damage insured under a property damage policy, is readily discoverable after a storm event. An absolute one year claim notification deadline should be established.

Abuse: Lawyers allege causes of action under various statutory and common law theories. Some of these result in duplicative recoveries, such as trebling of damages, interest and attorneys’ fees.

Solution: Chapters 541 and 542 of the Texas Insurance Code should be the exclusive statutory remedy for insurance-related claims (eliminate DTPA and Finance Code remedies).

Abuse: Under the Texas common law duty of good faith and fair dealing, an insurance carrier cannot be held liable if there exists a bona fide dispute as to coverage or payment of a claim. This standard is fair. It protects the insurance carrier from bad faith exposure when there is a legitimate dispute as to whether a claim is covered or whether a payment is owed. However, Section 542 of the Texas Insurance Code creates a strict liability standard for statutory penalties. The hail damage lawyers use this as leverage in negotiating settlements.

Solution: Create a “bona fide dispute” exception to statutory penalties under Section 542 of the Texas Insurance Code. There can be no liability if the reason the insurance carrier failed to timely pay the claim was a bona fide dispute as to whether the claim was covered or a payment was owed.

Notably, only one of these seven targeted changes (the last one, above) impacts the rights available to consumers under the Texas Insurance Code. That single change does not take away a consumer’s right to file suit when faced with improper insurance company conduct. The change only modifies the standard for recovering statutory interest and attorneys’ fees. Independent compensatory damages, treble damages, statutory interest and attorneys’ fees all remain fully recoverable when an insurance company knowingly engages in improper conduct.

Abuse: Texas building codes contain roof design requirements for wind, rain, snow and even foot traffic. But the codes say nothing about designing for our most common peril – hail. Why is that? It’s because the roofing shingle manufacturers have a good gig going in Texas (and they have a strong influence over the model building code authors). The manufacturers sell a “40 Year Shingle” knowing very well that most Texas homes have their roofs replaced as a result of hail damage every 10 to 15 years. Do you think these manufacturers ever receive a warranty claim in year 39? Of course not. These same manufacturers market UL Class 4 Hail Rated Shingles that are made to withstand moderate sized hail. These products are already marketed and sold in Texas.

Solution: Mandate that only UL Class 4 Hail Rated Shingles are installed on Texas homes, for both new construction and when insurance proceeds are used to replace a roof after a hail event. Yes, there will be an increased cost for these shingles. Perhaps the legislature could provide the insurance industry with additional protections from litigation in exchange for industry agreement to absorb this additional cost. A radical proposal? Yes, but these are radical times. In the long run, both homeowners and insurance companies will benefit from such a requirement. It’s just plain common sense that we should design for our most common peril. Right now we don’t.

Solution: Texas needs a consumer protection statute regulating the conduct of all insurance restoration contractors. Any type of contractor who is being paid on a construction project with insurance proceeds must be licensed, agree to maintain liability insurance, and agree to certain guidelines of ethical conduct (including never waiving deductibles).

Concluding Thoughts…Until I Write Again in 2018

In 1970, Hurricane Celia struck the Corpus Christi coast. Damage was catastrophic. Faced with this ongoing risk exposure, many private insurers withdrew from the coastal insurance market. The following year, in 1971, the Texas legislature created the Texas Windstorm Insurance Association, known today as “TWIA”, to ensure adequate windstorm coverage for the Texas coastal counties. Every legislative session brings disputes as to the funding of this quasi-governmental agency. No one likes the State of Texas being in the insurance business.

Unless the Texas legislature acts in the next session to address the hail lawsuit crisis, it is predictable that in a few years Texas will also have “THIA” – the Texas Hailstorm Insurance Association. Like what occurred after Hurricane Celia, the private insurance market will withdraw from portions (if not all) of the Texas hail insurance market. It is already happening.

If nothing is done, the Texas hail claims feeding frenzy will continue unchecked. In two years from now I’ll be back to write another follow-up article talking about how the private insurance market has stopped writing hail policies in Texas. I will be talking about the need for THIA.

Let’s end the feeding frenzy, not for the benefit of my insurance company clients, but for the sake of all Texans who are the ultimate victims of this crisis.

Steven Badger represents the commercial property insurance industry, both as a plaintiff in large loss catastrophe subrogation and as a defendant in roofing related losses. Badger’s practice is presently devoted entirely to addressing the emerging hail risk, with a specific focus on the identification of fraud, barratry and other illegal conduct occurring in these matters. He can be reached at sbadger@zelle.com