Drivers are faced with a number of distractions today. Consider that more than 587,000 people driving at any given time are holding cell phones, according to a National Occupant Protection Use Survey conducted in 2014.

According to Distraction.gov, a joint website run by the National Highway Traffic Safety Administration and the U.S. Department of Transportation, 3,179 people were killed and 431,000 were injured in motor vehicle crashes involving distracted drivers in 2014.

The CDC states the main distractions facing today’s drivers include:

According to the GHSA notes that 46 states, Washington D.C., Puerto Rico, Guam and the U.S. Virgin Islands ban all drivers from texting. Cellphone use laws while driving can be viewed on the GHSA website: http://www.ghsa.org/html/stateinfo/laws/cellphone_laws.html

Since April is distracted driving month, the federal government and individual states are working to combat the problem with public awareness campaigns.

National Transportation Safety Board Chairman Christopher Hart kicked off Distracted Driving Awareness Month and California Teen Safety Driving Week at press conference in California recently. He called on California to be first state to ban use of all personal electronic devices while driving.

“Behind every distracted driving death is a story of loss. In the blink of an eye, lives can be transformed forever,” said U.S. Transportation Secretary Anthony Foxx. “Scrolling through song lists on a cell phone, or texting while driving is not just irresponsible, it can have tragic consequences. We’re calling on drivers to put down their devices and help keep the roadways safe for all Americans.”

According to data from the California Highway Patrol (CHP), 22,365 people were involved in distracted driving collisions in 2014.

“As we rely on our cell phones more and more in our everyday lives, we seem to be kidding ourselves in thinking that they don’t affect our driving,” said California Office of Traffic Safety Director Rhonda Craft. “Crashes are up. The scientific evidence is solid. The dangers are real, and they apply to all of us. We need to silence the distractions.” 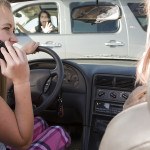 A 2014 study by the American Automobile Association Foundation for Traffic Safety found that cell phone distraction is much more prevalent than is reported in official government statistics.

“Our investigators can determine if speed, alcohol, or drugs were a factor in a collision,” CHP Commissioner Joe Farrow said. “However, it is difficult to determine when distracted driving is the cause. Most people do not declare that they were distracted before they crashed. Therefore, we know distracted driving statistics are underreported.”

“Operating a motor vehicle is a tremendous responsibility which requires a driver’s full attention,” said DHSMV Executive Director Terry L. Rhodes. “The department is reminding drivers of all ages to keep your hands on the wheel, your eyes on the road and your mind on driving.”

“Distracted driving is extremely risky behavior that not only puts drivers and passengers in danger, but others out on the road as well,” said Colonel Gene Spaulding, Director of the Florida Highway Patrol.

In Colorado, of the 203,827 motorists involved in a crash in 2013, an estimated 24.4 percent of those crashes were attributed to distracted drivers and between 2008 and 2013, there was a nine percent increase in the number of crashes caused by distracted driving in the state.

Travelers partnered with the Connecticut Department of Motor Vehicles this year for its 8th Annual Teen Safe Driving Contest. The winners were announced in February created videos based on the theme “When Shifting into Drive, Keep the Safety of Others in Mind!”

“These videos continue to send very powerful and persuasive messages to all drivers about the dangers of distracted driving. In its eighth year, the DMV-Travelers Teen Safe Driving Video Contest creates a significant impact on our young drivers,” said Attorney General George Jepsen.

Winning schools shared in a $15,000 cash prize and as well as other prizes and gifts donated to students and high schools by Travelers.

Some feel that auto manufacturers are partly to blame for the increase in distractions facing drivers today.

“As manufacturers continue to cater to millennials, they’re adding more and more technology to vehicles. These connected vehicles are drawing drivers away from the ultimate task, driving,” DeLago said. “Auto manufacturers need to eliminate distractions rather than adding to the problem.”