Customer satisfaction among homeowners filing a property claim has slipped for the first time in five years, largely driven by declines in satisfaction with the total settlement and service interactions, according to the J.D. Power 2016 U.S. Property Claims Satisfaction Study.

The study measures satisfaction with the property claims experience among insurance customers who have filed a claim for damages by examining five factors (listed in order of importance):

Satisfaction is calculated on a 1,000-point scale.

Worth an estimated $502.6 billion, the U.S. property and casualty insurance industry is entering a cycle of reduced profitability due to declining premium rates. Data from the 2016 U.S. Property Claims Satisfaction Study suggests that many insurers may already be shifting their focus away from customer satisfaction and toward areas of cost reduction. According to the study, satisfaction has declined by 5 points to 846 from 2015. The largest changes are in the service interaction factor (- 8 points), driven by declines in both the local agent (-8) and claims professional (-28) sub factors.

Weather events are also a significant driver of declines in customer satisfaction this year. Survey results are significantly impacted by the way insurers handled a few major events, such as the winter storms that hit the Northeast in early 2015 and the severe weather/hail claims that hit Colorado and some surrounding states in late 2014. However, weather alone does not fully explain the dip in overall satisfaction. For instance, simple service practices such as returning promised callbacks are down 1 percentage point from last year, and only 42 percent of customers indicate that when contacting their insurer someone was “always available immediately” to assist them. Responsiveness, a primary driver of service interaction satisfaction, is down significantly year over year among claimants interacting with local insurance agents or claims professionals (-0.09 points and -0.43 points, respectively, on a 10-point scale).

“During times of catastrophic events, insurance companies typically ramp up and have teams of claims professionals poised and ready to process claims locally in the affected region,” said Greg Hoeg, vice president of U.S. insurance operations at J.D. Power. “However, maintaining a high level of support is not cost effective when there is a lull in large events and especially when rates begin to fall. Belt tightening to a leaner team can sometimes mean less support and longer response times to process claims. Insurers need to be aware when cost cutting impacts response times. The less satisfied customers are with the claim process, the less likely they are to renew their policy.”

Following are some of the key findings of the 2016 study:

Amica Mutual ranks highest in overall satisfaction with the property insurance claims experience for a fifth consecutive year, achieving a score of 898. Amica Mutual performs particularly well in nearly all study factors. Auto Club of Southern California Insurance Group ranks second with a score of 879, followed by COUNTRY Financial, Encompass, and Erie Insurance, all scoring 863 in a tie. 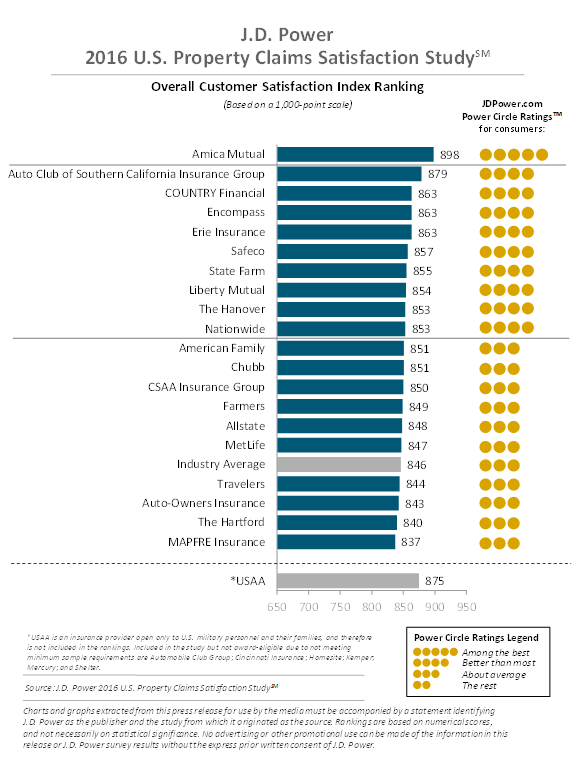 USAA also achieves high levels of customer satisfaction, although the insurer is not included in the rankings due to the closed nature of its membership.

The 2016 Property Claims Satisfaction Study is based on more than 5,700 responses from homeowners insurance customers who filed a property claim between January 2014 and December 2015.