Metrics drives decision-making, according to 72 percent of insurance staff handling litigated claims that responded to a recent survey by LexisNexis.

Survey respondents of the 94 U.S. property/casualty insurers ranged from staff counsel to vice president of claims and reported their companies spent between $10 million and more than $500 million annually on outside counsel.

The results were analyzed in a new report, U.S. P&C Law Departments Rate the Metrics They Use to Manage Costs and Performance. The report is the second in a series of market research surveys focused on how property/casualty insurers are managing litigation costs. The first report, P&C Law Departments Prioritize and Rate Initiatives for Controlling Costs, found that early case review and e-billing were the top cost containment programs for controlling defense costs. A third report is projected to be released in the first quarter of 2016.

Measuring the costs associated with litigated files is top of mind for insurers. The report analyzed the top metrics used to manage legal costs and performance and emphasized carriers track costs closely by case. Average case total cost, legal expense per case and the total number of days-to-resolution were all identified as being measured by more than 80 percent of survey respondents.

Especially noteworthy, according to the report, is that more than 60 percent of claims departments surveyed also reported tracking average or median bill rate by claim type. 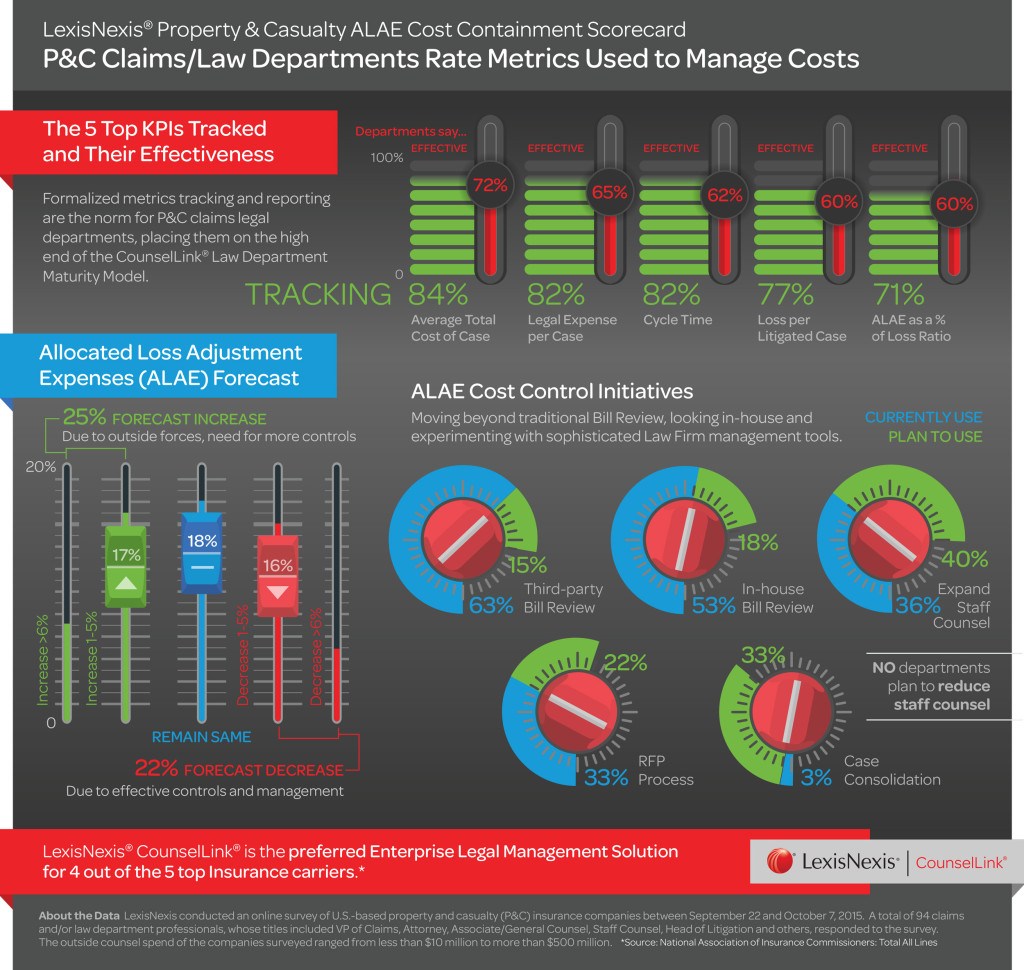 Determining which metrics are most effective is of value to claims litigation departments where efficiency matters.

Another metric that didn’t rate highly effective was the metric used to measure alternate fee arrangements (AFA) outcomes by fee type. A mid-year trends report released by LexisNexis on legal management trends indicated industry utilization of AFA was stable at almost nine percent of corporate billings and close to seven percent for all other matters. Overall, adoption of AFA has been embraced by the insurance industry at a greater level than across other industries; however, the report indicated the reason it has not been utilized at a higher level may be due to issues with measuring outcomes in an eBilling system environment. According to the report, “The risk for claims legal departments is twofold; a decrease in efficiency from having to use multiple processes and a loss of good data to report on costs and outcomes. Some carriers may be waiting for a system that grants them the same efficiency as their eBilling system, but allows them to track and report on AFA engagements and outcomes as well.”

According to a spokesperson, the third report will explore AFA in depth.

According to the report, “These figures are not surprising given the volume of invoices processed by P&C carriers. Our data indicates that bill review, whether in-house or via a third party, will continue to be integral to cost-control now and into the future.”

Less than half of those surveyed were willing to share ALAE ratio to losses. ALAE/Loss ratio between six and 10 percent were reported by 16 percent of respondents, nearly 26 percent reported a range between six and 15 percent, and 7.5 percent reported their numbers were greater than 25 percent. Interestingly, respondents were split when it came to whether they expected ALAE figures to increase or decrease in the next year. Those that expected an increase in ALAE figures felt that they were responding to outside forces they could not control like rising rates, increasing case complexity, longer cycle times, and potentially explosive litigation. Those who expected a decrease in ALAE pointed to their companies having effective cost control measures in place such as early identification, front line management and good relationships.

Another valued metric, cycle time, offers key information on communication, efficiency and on valuing and resolving cases in a timely manner. One respondent noted that “Cycle time shows the difference between early settlements and verdicts.”

Respondents’ top priority regarding cost control initiatives, according to the report, involves proper litigation case management supported by actionable analytics. Key insights revealed by the survey indicated that litigation management continues to be a top priority for the majority of property/casualty claims departments, metric tracking offers the potential to reduce litigation costs, the level of litigation management control is key to ALAE projections and as staff counsel is predicted to grow, tracking outcomes and measuring effectiveness becomes increasingly more important.