By the time the turkeys, pumpkin pies and cranberries are devoured and the calendar flips from November to December, 75 percent of Americans will have already started checking items off their shopping lists, according to a new poll released by Allstate. What many are not checking off, though, are simple steps to protect their homes – Allstate claims data shows many types of fire, theft and weather property claims increase during the holiday season. 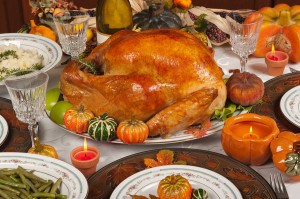 The third annual Allstate Holiday Home Hazards poll revealed risky behaviors, such as leaving packages in the open, leaving doors unlocked, or falling asleep with the stove on, a candle lit or a fire still roaring. Despite 71 percent of adults acknowledging the increased risk of in-home incidents, just 37 percent take extra care to protect themselves. The poll also found many do not heed safety warnings while decorating the home.

“Shopping season is in full swing, and it’s easy to let holiday cheer cloud our better judgment when buying and handling our purchases,” said Terri Dalenta, senior vice president of property products at Allstate. “Between gifts, decorations, big family meals, traveling and other activities, Americans can spend quite a bit of money during the holidays. Allstate’s goal is to help customers and consumers protect what matters most and stay safe, happy and healthy while enjoying a hazard-free holiday season.”

Despite 84 percent of adults planning to spend money on gifts this holiday season – including a quarter (27 percent) who say they expect to spend more than last year – many do not take the necessary precautions to keep their holiday purchases out of harm’s way:

Curbing some of consumers’ risky gifting behaviors may help put a damper on some of the most common holiday claims:

Nearly half of Americans (46 percent) will spend money on decorations this holiday season, with 21 percent of those individuals expecting to spend more money than last year. Many people, however, admit safety is not always top of mind when it comes to decking their halls:

There’s a distinct trend with decoration-related holiday home hazards: fire. Some of the most prevalent hazards, according to Allstate’s claims data:

Cooking and entertaining are staples of the holiday season, and Americans are willing to splurge to create the perfect holiday spread – the poll revealed the most important consideration while shopping for that crowd-pleasing dinner is the quality of the ingredients. But as hungry families around the country wait for holiday hams to roast, 87 percent of cooks say they’re multitasking – which can prove to be a recipe for disaster:

Most people are aware of the risks associated with cooking and hosting a get-together. Even so, there is still work to be done on the prevention front, as evidenced by the claims data:

One of the priciest purchases for many this season will be holiday travel. Sixty percent of Americans plan to spend at least one night away from home this year, with four-in-10 (41 percent) travelers planning to spend more on travel than last year. The poll revealed some risky behaviors that could contribute to home losses while away:

The holidays are busy enough as is, but when travel is thrown in, things can get even more hectic. Allstate claims data reveals upticks from colder temperatures that could wreak more havoc:

The survey of 1,001 American adults age 18+ was conducted Oct. 12 to Oct. 15 via an online survey using a sample reflective of the American population. The survey was conducted by FTI Consulting, Inc. (FTI) for Allstate.