The odds drivers will have a claim from hitting a deer, elk or moose is 1 out of 169, the same as in 2014. That likelihood more than doubles during October, November and December, when deer collisions are most prevalent, according to research by auto insurer State Farm. 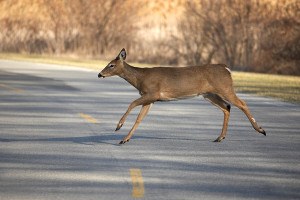 Nearly 10 percent of the country’s deer claims occur in Pennsylvania (126,275 collisions), though when taking into account the number of licensed drivers in the state, West Virginia edges out as number one with a likelihood of 1 in 44 compared to Pennsylvania’s 1 in 70 (fourth ranked state). This is the the ninth year in a row that West Virginia has topped the list, according to State Farm.

The top five states a driver is most likely to have a claim from a collision with a deer, elk or moose are:

The months a driver is most likely to have a claim involving a deer, elk or moose in the U.S., mostly due to mating and hunting seasons are November, October, then December.

A number of factors influence the risk of a collision with deer or other animals.

“Periods of daily high-deer movement around dawn and dusk as well as seasonal behavior patterns, such as during the October-December breeding season, increase the risk for auto-deer collisions,” said Ron Regan, executive director for the Association of Fish & Wildlife Agencies. “Changes in collision rates from year to year are a reflection of changing deer densities or population levels – more deer in a given area increases the potential for collision.”

He said deer populations are also affected by conditions such as new or improved roads with higher speeds near deer habitat, and winter conditions.

Using its claims data and state licensed driver counts from the Federal Highway Administration, State Farm calculates the chances of any single American motorist striking a deer, elk or moose during the time frame of July 1, 2014 to June 30, 2015 in all 50 states and the District of Columbia. The data has been projected for the insurance industry as a whole, based on the State Farm personal vehicle market penetration within each state. The State Farm data is based on comprehensive and collision claims only. Claims involving policyholders with liability insurance coverage only are not included.