American Trucking Associations executive Howard Abramson recently made a case in the New York Times for higher safety standards for trucks. It’s not hard to understand why: Large trucks were involved in at least 327,000 traffic accidents in 2013, killing almost 4,000 and injuring 95,000.

Size matters. According to the Utah Department of Transportation, “a fully loaded tractor-trailer weighing 80,000 pounds traveling under ideal conditions at a speed of 65 miles per hour will take 525 feet to stop (almost the length of two football fields).” Yet driving down the highway at that speed yourself, you may notice that the distance between your two-ton car and the 40-ton behemoth breathing down your neck is markedly smaller than a pair of NFL stadiums. 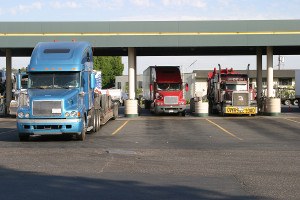 You can thank a driver for that. I haven’t been behind the wheel of a tractor-trailer since January 1980, but the basic task hasn’t changed much. I learned how to drive a truck on the job — by which I mean on the highway, surrounded by unsuspecting motorists. You have to be 21 to handle a big rig; I was underage, unlicensed and surely a public menace. Yet over the course of eight months on the road, I may not have been the scariest one out there.

According to an industry group, there are about 350,000 owner-operators in the trucking business. These are entrepreneurs who own their trucks, generally working as independent contractors for larger companies. The owner-operator I worked for, and drove in tandem with, leased a couple cabs that he owned to other drivers and kept the best, a gleaming new Kenworth, to drive himself. Together, we hauled household furniture for one of the big moving companies, loading someone’s furniture all day, then typically driving all night to the family’s new home in another town. We would unload it the next day.

Long hours are a constant point of contention between trucking companies (and owner-operators), who want to maximize profit, and regulators, who want to increase safety. In implementing a new policy in 2013, which reduced truckers’ maximum average work week from 82 hours a week to 70 hours, the U.S. Department of Transportation stated: “Working long daily and weekly hours on a continuing basis is associated with chronic fatigue, a high risk of crashes, and a number of serious chronic health conditions in drivers.”

I didn’t know a lot of drivers when I was on the road. But those I met seemed to take ridiculous hours for granted. Drivers are required to keep log books, which they show to police or state authorities at weigh stations, documenting their hours. But these were often exercises in narrative fiction. Drivers doctored the numbers or kept two sets of books. Meanwhile, to stay awake on long hauls, or through a series of them, amphetamines were a common resort, as was marijuana, often to take the edge off the amphetamines.

I skipped that stuff, but I rarely drove without fatigue. Never a good sleeper, I worked all day, stayed awake riding shotgun during my boss’s time behind the wheel, then drove myself when he got tired and wanted to sleep. Since I’d never learned to drive properly, I only knew how to shift through the lower register and higher register of the truck’s 13 gears. The middle gears, roughly six through 10, remained a mystery. Rather than pull over, my boss vacated the driver’s seat, and I moved in, as we rolled down the highway at high speed. After that, fear of the destructive power of the rig, and a cherished music tape, kept me going through the night. It didn’t seem insane at the time.

Since then, American roads have become much safer, with fatalities per 100,000 population declining significantly. But that’s largely a function of safer cars and social progress combating drunk driving. It’s possible that installing technology in trucks to monitor hours and performance might make the roads safer still. But I’m skeptical. Truckers have family obligations, hobbies, money troubles, love affairs. There’s no way to guarantee that they’re getting sleep when they’re not on the job, or that they’re alert and paying attention when they are. The best we can hope is that drivers are mindful of the enormous responsibility they carry along with their freight. And it probably helps if they have a license.

This column does not necessarily reflect the opinion of the editorial board or Bloomberg LP and its owners.