First-half losses represent a 36 percent year-over-year decline from 2014’s U.S. total of $12.6 billion, making it the lightest catastrophe first half since 2010. The ten-year U.S. average fell to $10.4 billion as a result. However, total catastrophe losses for the first half of 2015 could go higher, with estimates pending for three North American events (two in the United States and one in Canada). 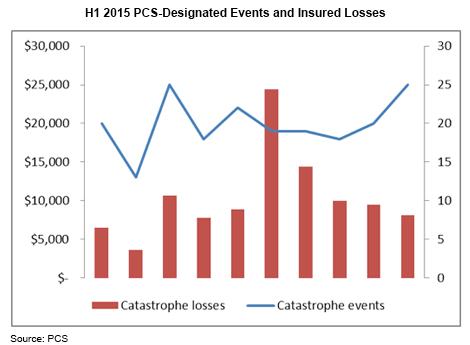 Texas was the state most affected by catastrophes, sustaining slightly more than $2 billion in insured losses. Massachusetts followed at just under $1 billion, largely the result of seven winter storm events that occurred in the first quarter. Oklahoma and Missouri had catastrophe losses of $620 million and $460 million, respectively. Like Massachusetts, New York remains in the top five for the first half because of first-quarter winter storm activity. With the Atlantic Basin quiet once again, Florida is not among the top ten. In all, first-half events affected 27 states in 2015 – up from 24 for the same period a year ago.

“We’ve been closely watching the trend toward smaller, more frequent catastrophes,” said Joe Louwagie, assistant vice president, PCS. “For claims departments across North America, this may have implications for catastrophe response planning, and the claims community should remain vigilant: Hurricanes Katrina, Rita, and Wilma followed the quietest first half in the past ten years.”