Erik Barnard sat with his 3-year-old son along Fenway Park’s third-base line, a few sections from where a woman was seriously injured when a broken bat flew into the stands two days earlier.

He never considered surrendering those front-row seats that aren’t guarded by netting. But he would be sure to protect little Christopher.

“I’ll definitely be watching out for him and putting him on my lap,” Barnard said before Sunday’s game between the Athletics and Red Sox. 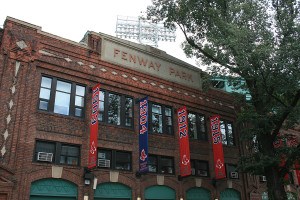 It’s a delicate balance for fans throughout the major leagues: weighing the danger of being hit by a wayward bat or ball against the enhanced experience of being so close to the action, few closer than at cozy Fenway.

Over the past three days, bats have flown into the stands in at least three cities. Yet fans consider the risk of injury minimal.

“I’d absolutely sit down here. Why not?” said 38-year-old Doug Jones, who was in the front row along the third-base line in Boston on Sunday, “but you need to pay attention.”

On Friday night, 44-year-old Tonya Carpenter was struck in the head by a bat that broke on a swing by Oakland’s Brett Lawrie in the second inning of Boston’s 4-2 win.

She was treated in the stands then rushed to Beth Israel Deaconess Medical Center with what police described as life-threatening injuries. She was listed in serious condition Saturday and Sunday, a hospital spokesman said.

In Cincinnati, no one was hurt Saturday when a bat landed in the stands. Everyone was OK Sunday when a bat sailed into the seats at the Tigers-White Sox game in Chicago.

And in the first inning of the Red Sox 7-4 win over the Athletics on Sunday, Boston’s Hanley Ramirez lost control of his bat. It hit the net in front of Oakland’s dugout.

Some fans with seats near the field prefer to sit directly behind home plate where they’re protected by a backstop. Parents sometimes arrange seating with their children between them. Others said they don’t consider safety when buying tickets.

At most major league parks, the netting that protects fans from foul balls covers the backstop behind the catcher, but stops before each dugout. Some fans said they would sit closer to the field if the netting were extended.

But that net might decrease a fan’s enjoyment of the sights and sounds – the lush green grass, the smack of the ball into the catcher’s glove – on a perfect afternoon for baseball like Sunday, sunny and warm with a slight breeze at historic Fenway.

“I do understand the objection of having something in front of you,” said 42-year-old Chad LeBlanc, who attended Sunday’s game with his 12-year-old son Logan.

Another fan, Jeremy Welford, said he was more conscious of the risk after Friday’s injury.

“If you’re with a youngster, it’s too dangerous,” he said with his 9-year-old daughter Megan beside him. “I sit behind the nets all the time and it doesn’t bother me.”

The backs of tickets tell fans to remain alert.

At Fenway, about a dozen signs facing fans in the front row of box seats warn red and white capital letters: “BE ALERT FOUL BALLS AND BATS HURT.”

Also facing them along that low wall are about twice as many televisions they can watch while a batter is swinging.

At Miami’s game at Colorado on Sunday, Mike and Erin Hart, both adult league softball players, sat just above the third-base dugout, one of the best spots at Coors Field to catch foul balls. Their two children were with them.

“We figured we’d put them in the middle, because then we could protect them a little bit better,” Erin said. “We brought our gloves. I figured if we’re not fast enough, we can dive on top of them if need be.”

No matter how vigilant, fans do turn away from the action to snap a selfie, fill in a scorecard or hail a hot dog vendor.

At Kansas City’s game against Texas, Royals fan Candace Hickman said, “I wish the Royals would expand the netting to at least the end of the dugouts to protect the fans better from foul balls. Even if you are watching closely, those line drives can reach the seats in a split second.”

In Chicago, Ray Finfer sat with his three sons when Adam LaRoche’s bat went into the stands Sunday.

“I saw the bat coming and my thought is hopefully you’re watching the game.” he said. “If you’re not going to do that, it’s not a great seat for you.”

In Toronto, Karen Luscombe, sat behind the third-base dugout with her son.

“I worry about it, for sure,” she said, but “the best view is where we want to sit.”

In Cincinnati, Laura Steinmetz Hawke usually sits in the upper deck for the price and the view, not for safety reasons.

“There is inherent risk in living life, and we cannot make every experience 100 percent safe,” she said.

And at Fenway, Francesca Cirillo sat with her husband and 18-month-old daughter Aria about 10 rows behind the spot where the fan was injured Friday night.

“I feel horrible for her,” she said but called what happened “a freak accident” and wasn’t uncomfortable sitting so close to the field.

“We brought our daughter,” she said. ” had the opportunity to leave her at home, but we decided to bring her because this is the first time I’m able to bring her to Fenway.”