But that’s no reason to believe coastal areas will have it easy, say the weather experts at the National Oceanographic and Atmospheric Administration (NOAA). 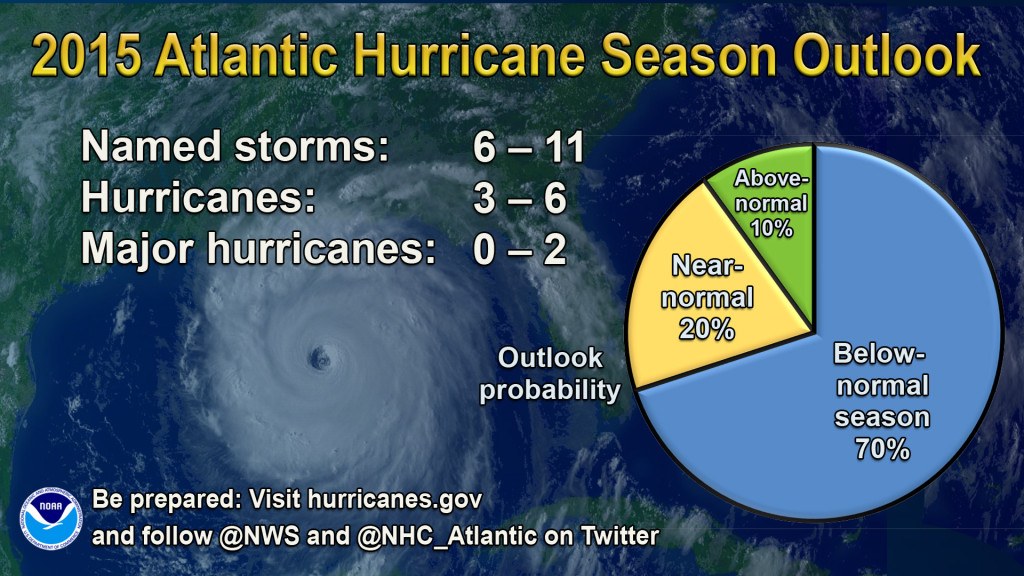 The main factor expected to suppress the hurricane season this year is El Niño, which is already affecting wind and pressure patterns, and is forecast to last through the hurricane season, according to Gerry Bell, Ph.D., lead seasonal hurricane forecaster with NOAA’s Climate Prediction Center.

“El Niño may also intensify as the season progresses, and is expected to have its greatest influence during the peak months of the season. We also expect sea surface temperatures in the tropical Atlantic to be close to normal, whereas warmer waters would have supported storm development,” Bell said.

Tropical Storm Ana is included in this current outlook Ana, but its pre-season development is not an indicator of the overall season strength, the forecasters said. They said Ana’s development was typical of pre-season named storms, which often form along frontal boundaries in association with a trough in the jet stream. This method of formation differs from the named storms during the peak of the season, which originate mainly from low-pressure systems moving westward from Africa, and are independent of frontal boundaries and the jet stream.

NOAA released a new prototype storm surge watch/warning graphic to highlight areas along the Gulf and Atlantic coasts of the United States that have a significant. The new graphic introduces the concept of a watch or warning specific to the storm surge hazard.

This week, May 24-30, is National Hurricane Preparedness Week.

“It only takes one hurricane or tropical storm making landfall in your community to significantly disrupt your life,” said FEMA Deputy Administrator Joseph Nimmich. “Everyone should take action now to prepare themselves and their families for hurricanes and powerful storms. Develop a family communications plan, build an emergency supply kit for your home, and take time to learn evacuation routes for your area. Knowing what to do ahead of time can literally save your life and help you bounce back stronger and faster should disaster strike in your area.”

NOAA said it will issue an updated outlook for the Atlantic hurricane season in early August, just prior to the historical peak of the season.