The age old superstition about falling prey to bad luck on Friday the 13th does in fact ring true for some motorists according to data from Aviva, the UK’s largest insurer, released last summer. Analysis of 10 years of Aviva claims data between 2004 – 2013 reveals that motor collision claims increase by an average of 13 percent on Friday the 13th, compared to other days in the same month. 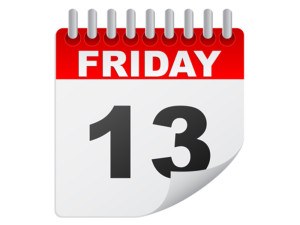 The unlucky day spookily sees more bumps and shunts than normal no matter what time of year Friday the 13th falls on – be it a cold winter, rainy spring or sunny summer.

Aviva commissioned research with OnePoll among 1,000 Great Britain adults online between May 29 and June 2, 2014 and found that although around two-thirds of people (63 percent) admit to holding some superstitious beliefs, just one quarter of us believe that Friday 13th is an unlucky day, according to research from the insurer.

Half admit to using the phrase ‘touch wood’ to prevent bad things from happening, while two-fifths (43 percent) avoid walking under ladders and 36 percent avoid opening an umbrella indoors.

“Friday the 13th is traditionally a superstitious day for many but it’s spooky to see motor claims rise by an ‘unlucky’ 13 percent,” said Heather Smith, marketing director of general insurance at Aviva. “While we don’t wish to cause a bout of friggatriskaidekaphobia (fear of Friday the 13th) among the population, we hope these figures will help encourage people to take extra care today, whatever they might be doing.”