A long anticipated El Nino has finally arrived. But for drought-struck California, it’s too little, too late, meteorologists say.

The National Weather Service on Thursday proclaimed the phenomenon is now in place. It’s a warming of a certain patch of the central Pacific that changes weather patterns worldwide, associated with flooding in some places, droughts elsewhere, a generally warmer globe, and fewer Atlantic hurricanes. El Ninos are usually so important that economists even track them because of how they affect commodities. 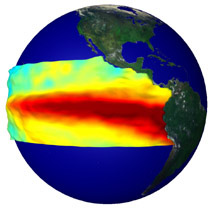 But this is a weak, weird and late version of El Nino, so don’t expect too many places to feel its effects, said Mike Halpert, deputy director of the weather service’s Climate Prediction Center. He said there may be a slight decrease in the number of Atlantic hurricanes this summer if the condition persists, but he also points out that 1992’s devastating Hurricane Andrew occurred during an El Nino summer, so coastal residents shouldn’t let their guard down.

There’s about a 50 to 60 percent chance the El Nino will continue through the summer, NOAA predicts.

Ever since March 2014, the weather service has been saying an El Nino was just around the corner. But it didn’t quite show up until now. Meteorologists said the key patch of the Pacific was warming but they didn’t see the second technical part of its definition – certain changes in the atmosphere. Halpert said he didn’t know why this El Nino didn’t form as forecast, saying “something just didn’t click this year.”

“What we’ve learned from this event is that our definition is very confusing and we need to work on it,” Halpert said.

Last year, some experts were hoping that El Nino would help the southwestern droughts because moderate-to-strong events bring more winter rain and snow to California – even flooding and mudslides during 1998’s strong El Nino. But this El Nino arrives at the end of California’s rainy season and is quite weak, Halpert said.

“This is not the answer for California,” Halpert said.

The U.S. Southeast may see some above average rainfall, which is typical for an El Nino, Halpert said.

This is the first El Nino since spring of 2010.

Allan Clarke, a physical oceanography professor at Florida State University, said as far he’s concerned, El Nino has been around awhile and the weather service didn’t acknowledge it. But he agrees that this doesn’t look like a strong one.

That fits with the pattern the last 10 years, when El Nino’s flip side, a cooling of the central Pacific called La Nina, has been more common. From 2005 to 2014, there have been twice as many months with a La Nina than with El Nino, weather records show. More than half of the time, the world has been in neither.