A new study estimates that fraud and claim “build-up” add between $5.6 billion and $7.7 billion in excess payments to auto injury claims paid in the United States. 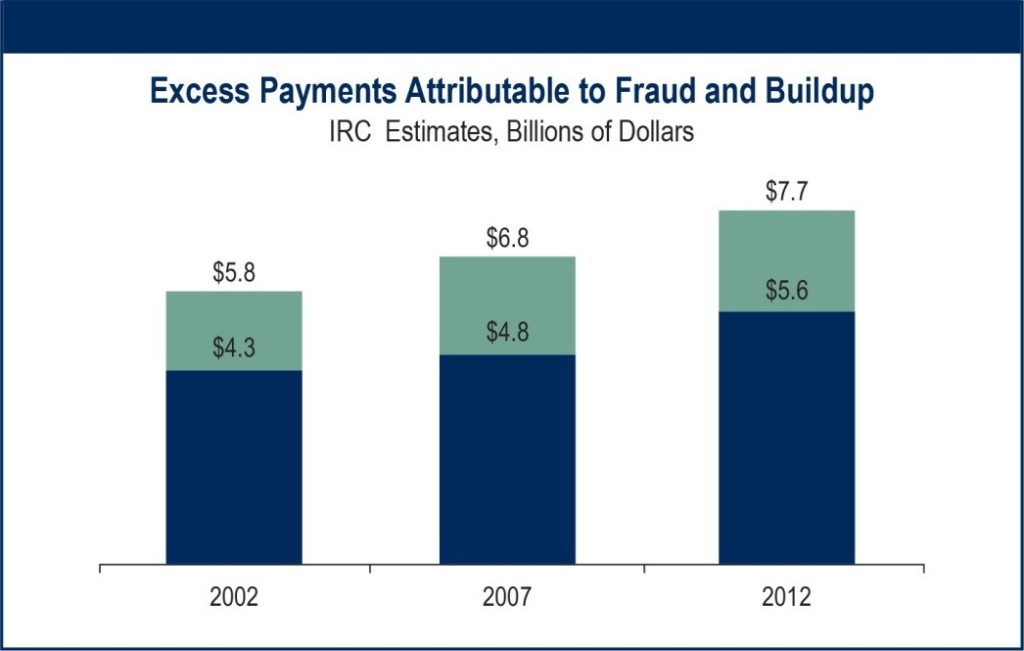 The excess payments represented between 13 percent and 17 percent of total payments under the five main private passenger auto injury coverages, according to the study from the Insurance Research Council (IRC) of 2012 claims data.

Twenty-one percent of bodily injury (BI) claims and 18 percent of personal injury protection (PIP) claims closed with payment had what the study terms the “appearance” of fraud and/or build-up in 2012.

The most common type of abuse was claim build-up, defined as the inflation of otherwise legitimate claims; claims with appearance of build-up accounted for 15 percent of dollars paid for BI and PIP claims in 2012. Claims with the appearance of fraud and/or build-up were more likely than other claims to involve chiropractic treatment, physical therapy, alternative medicine, and the use of pain clinics.

The prevalence of apparent fraud and build-up varied widely among states, especially no-fault states. States with highest rates of fraud and buildup among PIP claims included:

“The costs associated with auto injury claim abuse make auto insurance more expensive for everyone,” said Elizabeth Sprinkel, senior vice president of the IRC. “Efforts to lower insurance costs must include measures aimed at reducing the amount of fraud and buildup in the system.”

The report details several claim handling techniques used by insurers to identify and investigate claim abuse such as independent medical exams, peer medical reviews and special investigative units. IRC said the additional costs associated with these efforts are not included in the IRC estimates of excess payments.

The study, Fraud and Buildup in Auto Injury Insurance Claims, is based on continuing IRC research into the causes of increased auto injury claim severity. It is based on more than 35,000 auto injury claims closed with payment under the five principal private passenger coverages. Twelve insurers, representing 52 percent of the private passenger auto insurance market in the United States, participated in the study, according to IRC.