As freezing temperatures overtake much of the U.S., many drivers will consider warming their car up ahead of time. But depending on where you do it, some may be surprised to learn that it is against the law in certain states. 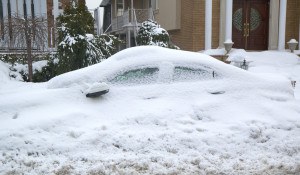 Colorado, Illinois, Maryland, Minnesota, Ohio, South Carolina, Texas, West Virginia, and Wisconsin all prohibit leaving keys in a car while the engine is running. Some states impose fines as much as $500 for doing so. Colorado has a law against “puffing” (which refers to the puffs of exhaust from the tailpipe of an idling vehicle) with fines of up to $100. In Minnesota, both Minneapolis and St. Paul police could cite a driver for leaving the keys in the ignition unattended. St. Paul police can go one step further by taking the car keys to a local police station.

In an alert released late last year, the National Insurance Crime Bureau warned drivers to never leave their vehicles running with the keys inside.

“We all like a warm car with a defrosted windshield, but so do the car thieves,” said NICB President and CEO Joe Wehrle. “Leaving a car running and unlocked in the driveway or parking lot is an open invitation to them to drive off with a vehicle that they normally couldn’t steal. Today’s late model vehicles are very difficult to steal thanks for improved anti-theft technology, but unfortunately many of the cars and trucks that are taken today are left unlocked with the keys inside.”

According to the NICB, police departments reported that a large percentage of stolen vehicles were left unattended with the keys still inside. A recent news report highlighted a one week period in which police said that out of the 22 cars stolen in Nashville, 10 had keys left inside. And in 2013, 60 percent of car thefts in St. Petersburg, Fla., were reportedly due to drivers leaving their keys in the car, according to the city’s mayor, Bill Foster. Just this past week, two cars were reportedly stolen in South Minneapolis while warming up.

An alternative, according to the NICB, is using a remote starter that doesn’t require a key to be in the ignition, but does require the door locks to be engaged before the engine will start. If this option isn’t available, the fraud fighting agency advises against drivers using one set of keys to start and lock the car while it warms up, while using a second key to unlock it when it’s ready. That’s because a car that is idling while unattended could attract a thief who can easily break a window to get inside and drive off.