Though a large majority of drivers support laws prohibiting cellphone use while driving one thing is apparent: people are still using them.

Percentage of drivers who say they’re less likely to use their cellphone under these conditions:

One particularly troubling finding: at least ten percent of respondents reported that driving in school zones and construction zones has no impact on their cellphone use. 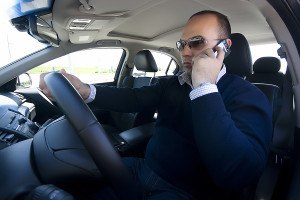 “It’s interesting to see that many drivers report assessing driving conditions when they make choices regarding using their cellphones,” said Chris Mullen, director of Technology Research at State Farm. “However, we want to remind people that there are demands on their attention when driving whether moving or not, and to please stay 100 percent focused on their drive.”

For six years State Farm has been conducting this survey of people’s attitudes and behaviors when it comes to cellphone use while driving, and trends have emerged.

“These six-year trends make it apparent that smartphones have created many new distractions for drivers to juggle,” Mullen said. “While much attention is paid to the dangers of talking and texting while driving, it’s critical that we also address the increasing use of other smartphone features and other sources of distraction.”