Outbreak data show that Americans are twice as likely to get food poisoning from food prepared at a restaurant than food prepared at home, according to the Center for Science in the Public Interest. 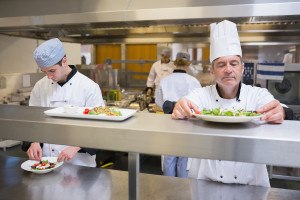 The nonprofit food safety watchdog group analyzed “solved” outbreaks of foodborne illness over a 10-year period—those outbreaks where both a food and a pathogen were identified by investigators—and found that 1,610 outbreaks in restaurants sickened more than 28,000 people. In contrast, 893 outbreaks linked to private homes caused nearly 13,000 cases of foodborne illnesses. Unfortunately, fewer and fewer outbreaks were solved by public health officials over the 10-year period, leaving a lot of important information undiscovered in the data.

Raw-milk proponents may find another of CSPI’s findings disquieting: Of 104 outbreaks of illness linked to milk, 70 percent were caused by raw milk. In other words, although less than one percent of consumers drink raw milk, they bear 70 percent of the burden of illnesses caused by milk-borne outbreaks.

“Pasteurization of milk is one of the most important public health advances of the last 100 years, sparing countless people from infections and deaths caused by Salmonella, E. coli, and Listeria,” said CSPI senior food safety attorney Sarah Klein. “Consumers should avoid raw milk, and lawmakers should not expand its availability.”

CSPI also documented a trend of decreased reporting of foodborne illness outbreaks. States reported 42 percent fewer outbreaks to the Centers for Disease Control and Prevention in 2011 than they did in 2002. Fewer reported outbreaks, though, doesn’t necessarily mean that fewer Americans are getting sick. The recent recession, influenza pandemics, and post-9/11 bioterrorism investments have all diverted state public health budgets and attention away from identifying outbreaks and figuring out their causes.

“Underreporting of outbreaks has reached epidemic proportions,” said CSPI food safety director Caroline Smith DeWaal. “Yet the details gleaned from outbreak investigations provide essential information so public health officials can shape food safety policy and make science-based recommendations to consumers. Despite the improvements in food safety policy in the past decade, far too many Americans still are getting sick, being hospitalized, or even dying due to contaminated food.”

Fresh produce, seafood, and packaged foods regulated by the Food and Drug Administration were responsible for more than twice as many solved outbreaks as meat and poultry products, which are regulated by the U.S. Department of Agriculture. The FDA Food Safety Modernization Act, signed into law in January 2011, was designed to give the agency the authority it needs to conduct more frequent inspections of food processing facilities, particularly higher-risk ones. But the agency has been slow to finalize a number of complex regulations—and Congress, in turn, has been unwilling to provide sufficient funds for the FDA to bring the reform law into full effect, says CSPI.

CSPI’s Outbreak Alert! database includes 7,461 unique and solved outbreaks of foodborne illness that occurred from 1990 through 2011. The report issued earlier this month examined the 3,933 outbreaks that occurred in the most recent 10-year period. Those outbreaks sickened 98,399 people. The CDC estimates that 48 million people are sickened annually, of which 128 thousand are hospitalized and 3,000 die.