While Mother Nature continues to challenge drivers across the country, a team of traffic engineers is working hard on a new way to make rush-hour commutes safer and faster in any weather.

“We can’t do much about snow falling, but we can do something about road capacity and congestion,” said Joseph Hummer, traffic engineering expert and Wayne State University College of Engineering chair of civil and environmental engineering. 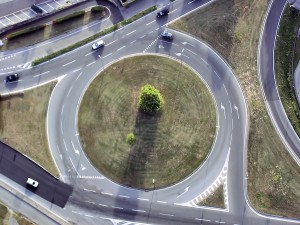 Hummer and a team of traffic engineers at the Regional Transportation Alliance and North Carolina State University believe metered roundabouts, or “super circles,” could help safety and ease traffic congestion across the United States. According to the team’s research, explained in a paper titled “The Potential for Metering to Help Roundabouts Manage Peak Period Demands in the U.S.,” super circles are common in Australia and England, but have yet to be researched or implemented in the U.S. The research team built and tested a mathematical model of traffic flow through super circles.

Roundabouts have been implemented in the United States for some time. Hummer says when built correctly they are 30 to 40 percent safer than traditional signalized intersections and offer a 60 percent injury savings.

“The one classic dilemma with roundabouts, though, is that some have capacity issues during peak hours. Once they break down, they get ugly and lock up. Our research was trying to find a way to get the safety benefits of a traditional roundabout while creating a capacity treatment for the peak hours of the day,” he says.

A “super circle” involves adding a stop light to one approach of a roundabout to control the number of vehicles entering during rush hours. “The meter would only operate during peak hours and would free up space in the circle for the busiest traffic streams to enter,” he says. The rest of the day, with the meter turned off, the roundabout would do its job saving collisions.

Here in Michigan, Hummer can envision utilizing super circles in a number of places.
“Michigan is really well suited to metered roundabouts. I could find hundreds of places of these in Metro Detroit alone at the junctions of the mile roads,” says Hummer. “They aren’t suitable for the huge arterials like Woodward, Gratiot or 8 Mile, but would work almost anywhere you have two, two-lane roads meet at a traffic signal.”

According to Hummer, a modern roundabout costs, on average, $250,000 while the cost to society for a fatal collision or injury collision averages around $4 million and $100,000, respectively.

“The super circles wouldn’t have to be out there too long to justify costs, at least on a societal basis. But the biggest benefit from all would be the lives and injuries saved,” he says.