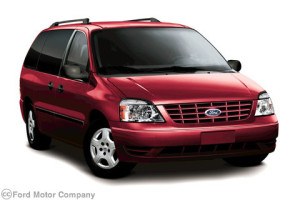 and Chrysler Group LLC after the two U.S. automakers conducted safety recalls this year to fix glitches in some models.

The U.S. National Highway Traffic Safety Administration closed both investigations in early May, according to documents filed on the agency’s website late on Tuesday.

In late 2011, NHTSA began exploring reports of corrosion problems in 200,000 Ford Freestar and Mercury Monterey minivans made for the 2004 through 2007 model years.

In March, Ford recalled 230,000 minivans worldwide to repair the problem that could prevent the fold-down, third-row seats from locking in place. Ford’s recall affected 33,500 minivans outside the United States.

The second-largest U.S. automaker’s recall in the United States was confined to vehicles sold or registered in the 20 states and the District of Columbia, where road salt is used.

NHTSA said about 100,000 minivans outside these so-called “salt belt” states were not included in the recall because they experience “significantly lower failure rates.” But regulators added that they will monitor complaints of rust in those models.

In a separate filing, NHTSA said it also closed its probe of 115,000 Jeep Patriot SUVs made for the 2011 and 2012 model years after receiving complaints that the engines would stall while running at high speeds. The safety agency opened a preliminary evaluation into the issue in October 2012.

Chrysler found that the stalling engine issue was confined to a smaller group of vehicles equipped with a saddle type fuel tank made with malformed transfer tubes. The glitch was found in models built between October 2011 and May 2012.

Chrysler recalled about 30,000 model year 2012 Jeep Patriot and Compass SUVs globally for the issue in April.

Both Ford and Chrysler said there were no accidents or injuries related to the problems. Chrysler is a unit of Italian automaker Fiat.