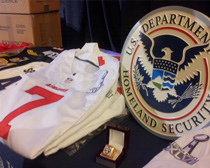 The items had a manufacturer’s suggested retail price of more than $17.3 million.

Operation Red Zone not only targeted international shipments of counterfeit merchandise as it entered the United States, but also focused on warehouses, stores, flea markets, online vendors and street vendors. This year, additional focus was placed on identifying and seizing counterfeit tickets to the Super Bowl. In all, 168 tickets were seized with an MSRP of more than $154,000. Forty-one individuals were arrested nationwide during the operation including six federal and 35 state and local arrests.

Furthering HSI’s efforts to combat the international counterfeiting supply chain and piracy online, special agents seized a total of 313 websites identified to be selling counterfeit merchandise. The website seizures during Operation Red Zone are the next iteration of Operation In Our Sites, a long term law enforcement initiative targeting counterfeiting and piracy on the Internet. The seized websites are now in the custody of the federal government.

Special agents from ICE’s Homeland Security Investigations (HSI), U.S. Customs and Border Protection, U.S. Postal Inspection Service, and state and local police departments around the country worked in partnership with the NFL and other major sports leagues during the operation.