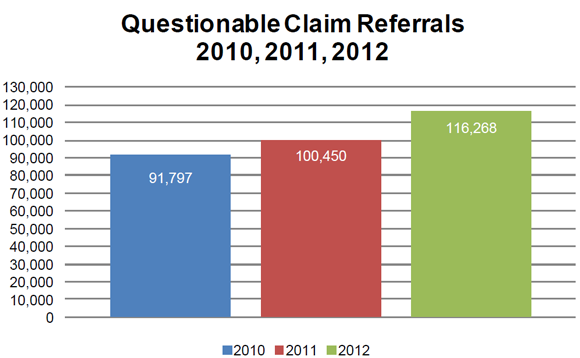 Questionable claims are those claims that NICB member insurance companies refer to NICB for closer review and investigation based on one or more indicators of possible fraud. A single claim may contain up to seven referral reasons.

The report examines six referral reason categories of claims: property, casualty, commercial, workers’ compensation, vehicle and miscellaneous referred in 2012, with those referred in 2010 and 2011.

Although there have been year-to-year increases in QCs, they represent a small percentage of the overall claims processed. Each year over 56 million claims are processed, making 2012 QCs just 0.20 percent of total claims. Moreover, while QCs are by definition suspicious, at the time of referral they have not been identified as definitive acts of fraud.