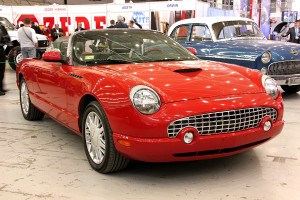 The Thunderbird went through several design changes over its life, and production halted after the 1997 model year. Production resumed in 2001 with a look reminiscent of its 1955 ancestor and lasted through the 2005 model year when the Thunderbird finally ended its run with a 50th anniversary limited edition.

Work on the concept for a Ford sports car began in 1953 when Ford authorized its engineers and designers to create a two-seat convertible weighing 2,525 pounds, equipped with Ford’s Interceptor V-8 engine and the ability to reach a top speed of more than 100 mph.

Naming the new car was not easy until a young Ford stylist, Alden Giberson, submitted the name Thunderbird. It was inspired by the legend of the Thunderbird, a mythical creature that is popular in the culture of the many indigenous peoples of North America. It was an instant winner.

The base sticker price of $2,695 included the removable hardtop, but not the soft top. Clock, tachometer, power-operated seats and a 292 CID V-8 engine also were standard equipment. However, practically none of the early Thunderbirds left the dealership without either overdrive or automatic transmission and most of the power options. Prices of the 1955 models ranged from $3,000 to $4,000.

Beginning with the 1958 model, Ford moved production of the Thunderbird from Dearborn to its Wixom, Mich., assembly plant where it remained until Ford retired the nameplate in 2005. A total of 4.3 million Thunderbirds were produced over its life span.

As with other classic cars, many of them capture the interest of thieves, as well as enthusiasts and collectors. The Thunderbird is no different.

NICB reviewed Thunderbird theft data from 1981-2011 and identified 179,625 theft records. Although theft records exist from 1955, only theft records from 1981 on are included in this report. That was the year when the National Highway Traffic Safety Administration (NHTSA) required vehicle identification number (VIN) standardization.