For over 25 years, the National Insurance Crime Bureau (NICB) has published Hot Wheels, an annual report of America’s 10 most stolen vehicles. While popular expectations have been that newer, more expensive vehicles would top the list, the data has repeatedly shown quite the opposite, with older, less flashy models topping the list.

As a take-off from our traditional Hot Wheels report, beginning with this release, the NICB will periodically issue a special report—Hot Wheels Classics—focusing on a specific class of vehicle or make and model. For the debut report, NICB selected the iconic Ford Mustang. 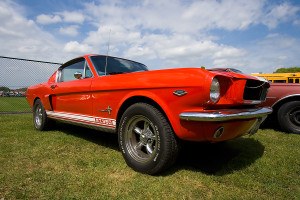 Since it was first introduced to the public at the 1964 New York World’s Fair, nearly eight and a half million Mustangs have been sold, making it one of the most popular and enduring vehicles to ever grace a dealer’s showroom.

Unfortunately, over the years many Mustang owners have had to deal with the theft of their pony cars. Aside from the hassle of losing their transportation and all that entails, a Mustang loss can be overwhelming given that many owners form an emotional bond with their machines. You would probably have to own one to understand that.

NICB reviewed Mustang theft data from 1964-2011 and identified 611,093 theft records. Although data for all years is available, confidence in pre-1981 records is low due to the inconsistency in reporting protocols and vehicle identification number (VIN) systems in use prior to 1981.

Since the National Highway Traffic Safety Administration required VIN standardization beginning with the 1981 model year, that year is the oldest reliable data used in this report. Data prior to 1981 is provided for information only.

The following graph shows the top 10 most stolen Mustang model years for the period 2001-2011. Overall, a total of 91,152 Mustangs were stolen during this time frame; the top 10 listed below accounts for 45,421 thefts or 50 percent of all thefts during that period.

Frequently, NICB recovers stolen vehicles that have long since been forgotten — except by their owners.

In 1982, a Mustang owned by a young Marine stationed at Cherry Point, N.C., was stolen. This was no ordinary Mustang; it was a 1965 Shelby GT-350. The Marine soon deployed and never saw that car again—until 2007 when an NICB agent contacted him with news that his Mustang was located in Maryland.

In the intervening years since it was stolen, the Mustang’s true identity — its VIN — had been painstakingly altered and matched with a fraudulent title. It was then sold to an unsuspecting buyer who eventually put a new $12,000 Shelby engine in it.

The duped owner was contacted in 2007 by the Maryland State Police and an NICB special agent asking to inspect his Shelby. As you can imagine, he was absolutely dazed when they informed him that his prized possession was, in fact, stolen property.

That young Marine from 1982—now a professional airline pilot—was overjoyed when he was notified that his dream car had been recovered and was in excellent condition. And, in a classy gesture of goodwill—he was not legally required to do so—the pilot gave the former owner a check for $12,000 for the engine.