Junior Seau, one of the NFL’s best and fiercest players for nearly two decades, had a degenerative brain disease when he committed suicide last May, the National Institutes of Health told The Associated Press on Thursday.

The NIH, based in Bethesda, Maryland, conducted a study of three unidentified brains, one of which was Seau’s. It said the findings on Seau were similar to autopsies of people “with exposure to repetitive head injuries.”

Seau’s family requested the analysis of his brain.

Seau was a star linebacker for 20 NFL seasons with San Diego, Miami and New England before retiring in 2009. He died of a self-inflicted shotgun wound.

He joins a list of several dozen American football players who had CTE. Boston University’s center for study of the disease reported last month that 34 former pro players and nine who played only college football suffered from CTE. 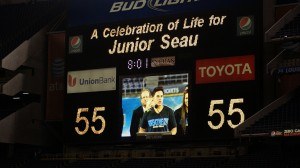 “I was not surprised after learning a little about CTE that he had it,” Seau’s 23-year-old son, Tyler, said. “He did play so many years at that level. I was more just kind of angry I didn’t do something more and have the awareness to help him more, and now it is too late.

“I don’t think any of us were aware of the side effects that could be going on with head trauma until he passed away. We didn’t know his behavior was from head trauma.”

“He emotionally detached himself and would kind of `go away’ for a little bit,” Tyler Seau said. “And then the depression and things like that. It started to progressively get worse.”

He hid it well in public, they said. But not when he was with family or close friends.

The NFL faces lawsuits by thousands of former players who say the league withheld information on the harmful effects concussions can have on their health.

“We appreciate the Seau family’s cooperation with the National Institutes of Health,” the league said in an email statement to the AP. “The finding underscores the recognized need for additional research to accelerate a fuller understanding of CTE.

“The NFL, both directly and in partnership with the NIH, Centers for Disease Control and other leading organizations, is committed to supporting a wide range of independent medical and scientific research that will both address CTE and promote the long-term health and safety of athletes at all levels.”

NFL teams have given a $30 million research grant to the NIH.

Seau is not the first former NFL player who killed himself, then was found to have CTE. Dave Duerson and Ray Easterling are others.

Duerson, a former Chicago Bears defensive back, left a note asking for his brain to be studied for signs of trauma before shooting himself. His family filed a wrongful death suit against the NFL, claiming the league didn’t do enough to prevent or treat the concussions that severely damaged his brain.

Easterling played safety for the Atlanta Falcons in the 1970s. After his career, he suffered from dementia, depression and insomnia, according to his wife, Mary Ann. He committed suicide last April.

Mary Ann Easterling is among the plaintiffs who have sued the NFL.

“It was important to us to get to the bottom of this, the truth,” Gina Seau said, “and now that it has been conclusively determined from every expert that he had obviously had it, CTE, we just hope it is taken more seriously.

“You can’t deny it exists, and it is hard to deny there is a link between head trauma and CTE. There’s such strong evidence correlating head trauma and collisions and CTE.”