Montana State Prison inmate files suit for $2.2 million in federal court after he injures a toe when his foot got caught in a grain auger at the prison dairy.

A Howard County, Indiana, inmate files a lawsuit claiming the facility is a danger to his health. Overcrowding has caused the spread of methicillin-resistant Staphylococcus aureus and other diseases at the jail.

The mother of an inmate seeks at least $75,000 after her son was struck by lightning while jogging in a recreation yard in an Ohio prison. She accuses the prison department of negligence.

The family of an inmate killed in a privately-run prison in Arizona files a wrongful-death lawsuit against the state of Hawaii and Corrections Corporation of America, the prison operator. The prisoner was strangled by another inmate.

A mentally ill inmate in Colorado sues the state and the Colorado State Penitentiary to be removed from solitary confinement, which his lawyers argue has contributed to his psychiatric conditions, resulting in misbehavior that warrants further punishment. 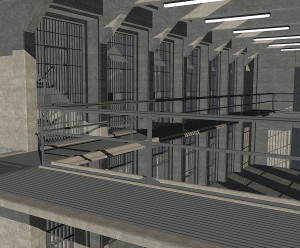 Losses for sexual misconduct are common in this class of business, Eichhorn says, but correctional facilities are also targets for errors and omissions (E&O) claims. A prisoner or inmate could be released too early by mistake, for example.

Abuse is another popular claim. A common allegation: a prison guard beats up a prisoner. “You find all kinds of weird losses,” he says.

Discrimination claims pop up as well. “You also have the cases where a patient or inmate sues because they are being discriminated against from a religious standpoint or a racial standpoint,” Eichhorn says.

While lawsuits are plentiful in criminal justice sector, many allegations end up nowhere. Even so, defense costs for the facilities mount.

Expense factors can be costly, Eichhorn says. “You deny the claim and get out of it, but you still have to defend it.”

Coverage to defend can be critical for correctional facilities, Eichhorn says. “Our program has defense. It can go either way, defense inside limits or defense outside. We prefer defense outside, but a lot of carriers will not do that, for the cost.”

This unique class of business is very difficult because it’s catastrophically driven, says Mike Davis, senior vice president of HCC Specialty, a division of HCC Holdings Inc. But that’s also what makes the criminal justice industry a perfect fit for the program marketplace, he adds.

The criminal justice system and facilities working in this sector fit the parameters of what program business should be, Davis says. “Number one, it’s a specialized and very unique coverage. Number two, it’s serving an underserved community. It’s something that not all carriers want, and for obvious reason, it requires a lot of expertise. It’s not like writing a Hallmark gift card shop,” he says.

Every risk in this unique industry is different. “It very much fits the model of program business.”

With one in 33 adults under the supervision of adult correctional authorities in the United States, or about 7.1 million people in total, insuring the risks of such facilities can mean big business for agents, brokers and carriers focusing on this class.

Most offenders under correctional supervision — about seven in 10 persons or nearly 4.9 million people — are classified as under probation or parole at year-end 2010. But some three in 10, or nearly 2.3 million people, were incarcerated in state or federal prisons or local jails, according to the Bureau of Justice Statistics (BJS).

Insuring the business of prisons, whether publicly-owned or privately-owned correctional facilities, is nothing like insuring the local drugstore, Eichhorn says, where every agent is beating on the door to write the risk.

“There aren’t that many agents soliciting this type of business,” he says. Targeting this class, Eichhorn says, “almost takes a special type of agent.”

One budding specialist in this class of business is Tanner Cooper, a producer at CFR Insurance, an independent insurance agency based in Tulsa, Okla.

Cooper entered the business of insuring correctional facilities just five years ago and has immersed himself in understanding the unique risks and exposures faced by the sector ever since then. “I’m probably as close to a specialist as what we have in Oklahoma,” he says.

Cooper began targeting the industry after landing a client that operates 10 correctional facilities in three states. The organization is privately owned and runs halfway house facilities with 2,700 beds for inmates leaving the prison system. Each program is closely aligned with each state’s correctional programs. Cooper describes the facilities as an inmate’s last step before reintegration into the general public.

All inmates hold full time jobs on a work release program. The correctional services facility also provides counseling for substance abuse and other issues to help inmates prepare for life outside the correctional system.

While most of the property exposures can be compared to a typical commercial property risk, the casualty exposures differ considerably, he says.

“It is such a unique exposure and industry — it takes some research to get your hands around it,” he says. “The more you dig into the more you understand the hidden risks and what could potentially pop up.”

Coverage for correctional facilities can be difficult to find but the options for markets have grown in the five years Cooper has targeted the class.

”From a property standpoint the risk is not that difficult,” Cooper says. “On the casualty side, that’s a different story. Anytime you hear private corrections or private prisons any underwriter’s ears perk up and most of them say no thanks and close the file.”

Cooper says the correctional and treatment services market is not huge, but it has experienced growth in recent years thanks to the trend of privatization. In times of budget cuts and overcrowded prisons, some states have moved to contracting out some correctional services to privately owned institutions.

Funding cuts are driving some states to release prisoners to halfway houses ahead of time, Eichhorn says. As a result the number of halfway houses that need insurance has increased.

Cooper says the move to halfway houses cuts costs for the state while also helping to curb overcrowding in prisons.

In Oklahoma, he says, per day costs of a bed for a correctional facility is about $33.75. When an inmate participates in a halfway house program, like one his client runs, that individual is allowed to work, make money and then pay back the state on an average of about $10 per day. “So you are knocking $10 a day off of each bed, which is a lot of money.”

Eichhorn also says the number of private prisons has also increased in some regions since 1998. There are about three major companies that specialize in private prisons nationwide.

States are realizing that private programs can be more efficient and solve some of the problems in the standard prison system, at least for a portion of inmates, Cooper says.

The trend of correctional facility privatization is creating demand, Cooper says. And “the more demand there is the more insurance companies are willing to offer a solution.”

Private prisons and correctional facilities are nothing new to the criminal justice industry, HCC’s Davis says. But some question whether privatization of prisons leads to unsafe facilities as corporations push for profits.

In Davis’ opinion, that isn’t so. From a risk management perspective, he views privately-run correctional facilities as more cautious than publicly-owned facilities when it comes to policies and procedures.

“I think that from a private sector standpoint, they have to be even more cautious of safety, security and the civil rights issues than a governmental entity does because they have no immunity to stand behind,” he says.

But immunity from liability is a gray line at best, even for government-owned correctional facilities, says Cooper.

States may have some immunity, but only up to a point, he says. If states are at fault, they do get sued and can lose, he says. “If you turn on the news there is always something … wrongful incarceration or something like that, and they (inmates) win and these individuals get paid.”

According to Davis, when it comes to the debate of public vs. private correctional facilities, there appears to be two schools of thought. “You have for-profit and not-for-profit companies that do this kind of work. Some people think that a non-profit is most at risk of lacking of services because they don’t have the money. Other people think that it’s just the opposite, that those people just care about what they do, so the money doesn’t matter, where in a for-profit system, it’s all about money. That’s not true either.”

Davis asks, “Does it actually give them the ability to provide better programming and better services because they are operating on a for-profit basis? Depending on which camp you’re in, you could certainly argue either one. I think in the end — it’s regulation and oversight that is the key.”

“They have more control and they can turn away people. It’s not like the state where if someone is arrested and they are booked into jail well there is no place else they can go. Whereas in a private facility, if the facility is full, then it is simply full. They have more control,” Cooper says. “I have a hard time finding any faults with the private side of the industry.”

Eichhorn sees steady growth in the correctional services industry in the form of specialized coverages to meet the needs of this very unique market niche.

We anticipate steady growth because of the specialized coverages the Breckenridge Corrections and Treatment Services (CATS) program provides, he says.

“Our policy was started from scratch,” he says. “I think it’s the only one in the marketplace that has a policy that was written specifically for criminal justice system operations.”

The CATS program can provide coverage for property, general liability, professional liability, including incidental malpractice. Coverage can be on either an occurrence form or claims made form. Employment practices liability insurance and stop gap coverage can also be offered.

“One of the main features is that we can provide coverage for sexual misconduct. That includes either claims made or an occurrence basis, they have their choice,” Eichhorn says. “We could do a sublimit or a full-limit. Most companies will not do a full-limit sexual abuse. Our typical limits are $1 million per occurrence, $3 million aggregate. Again, that can be for the sexual abuse and also criminal justice coverage.”

Davis says he has yet to see many retailers focus on this class, but there is opportunity.

“It seems to be one of those one off classes that there’s a lot of people that have some of this business, but nobody that would stand out as a specialist,” he says. “You’ve got the Marshes and the Willises, and those kinds of people that write some of the super large accounts, but they don’t go after the guy that’s got the 500 bed facility.”

Cooper hopes to fill that void and be the agent of choice when it comes to correctional facilities.

“I love it,” he says. The risks and exposures in the criminal justice marketplace keep him on his toes, he says. “Everything is different. It is something I feel like I can really help with.”

After all, that’s what agents and the insurance industry are in the business of doing: helping people identify risk.