Burns relating to workers’ compensation injuries account for 30 percent of the admissions seen at the Maricopa Medical Center in Phoenix, Ariz.; the second busiest burn center in the nation, according to Dr. Allen Holloway, the director of Burn Outpatient Services.

According to Dr. Holloway, who spoke at Andler & Associates’ recent educational training burn, there are several factors that can affect the severity outcome:

According to a 2010 Paradigm white paper, Volatility and Complexity in Burn Injury Claims, workers’ compensation claims involving burns cost an average of $200,000 to upwards of millions of dollars. The scope of the injured area and whether complications arise are key factors in determining how much a burn claim will cost, the Paradigm paper states. 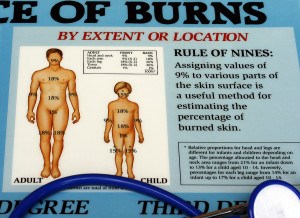 Depth also plays a role in the treatment course and cost of a burn injury. Depth can be divided into partial – shallow, partial – deep and full thickness.

According to Dr. Holloway, if there is a third degree burn bigger than a .50 piece a skin graft will be needed.

According to OSHA statistics, one of the four main causes of worker deaths on construction sites is electrocutions.

The skin, bones and muscles have high resistance while ligaments and nerves have low resistance, Dr. Holloway said.