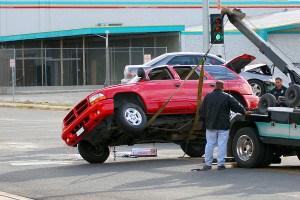 Brand, founder of Brand & Associates, a firm specializing in insurance litigation, said that the practice soon found its way to personal auto.

“[It] migrated to personal auto insurers,” he said, during a session on the subject at the Insurance Fraud Management Conference in Phoenix, Ariz. “The exposure might be smaller, but at a much higher frequency.”

While these are not definitive cases of fraud, the reduction in QC reporting in 2011 may represent the industry’s proactive battle against such fraud.

According to Brand, the main cause for the rise relates to how towing companies get called to a scene. Usually, state and local police investigating a crash will contact a towing company on a rotational list, Brandt said.

The insurance litigator provided an example:

A semi is driven off a rural road and ends up wrapped around trees in a wooded area. A towing company called to the scene billed the semi’s insurer a whopping $21,588 claiming five days of work. The company claimed it used an entire fleet of heavy equipment and wreckers to remove the semi from the heavily wooded area. Day one’s bill included extra charges for a front end loader, chain saws and extra labor – billed at $350 per hour. Day two’s invoice included billing for chipping and hauling away trees and continued extra laborers and day three and four included charges for 24 hours’ worth of environmental cleanup. Day five’s billing had the tractor storage charge, accruing at $50 per day for a total of 45 days before the towing company released the semi after being paid in full.

According to Brand, the “old school” way in which towing companies tried to submit inflated invoices involved questionable invoices submitted by the same individuals. As a result, fraudulent billing practices and rates were easier to spot against standard invoices because the fraudsters had their own signature or thumbprint, he said.

In 2009 a heavy equipment recovery company decided to set the standard for routine recovery practices. The company set reasonable rates for services and sold it to towing companies, Brand said. But, increasingly, the reasonable rates set for services became artificially inflated, like tacking on a four hour minimum or adding on administrative fees.

According to Brand, the company passed on these creative billing ideas to other towers and recovery companies through nationwide training, via websites and even during towing conventions.

Companies became sophisticated, adding experts and full-time attorneys to review coverage issues when insurers denied payment. Brand said that the program was created as an illusion of best practices; companies portrayed themselves as public safety icons.

Brand said the companies built this façade by:

Whereas the majority of inflated charges were billed as hazardous materials recovery, they are now being billing as remediation and cleanup, Brand said.

Once the issue was identified by SIU, the company provided training to the auto property field claims unit in order to identify tow bill red flags, Bodoni said. There were subsequent strategy meetings with the auto property field claims management and total loss unit. The issue was added to a watch list and a SIU liaison was designated, he said. There was also coordination with legal counsel and a call out to adjusters to keep an eye out for inflated tow bills.

According to Bodoni, the first invoice appeared a few weeks after the plan was implemented. A field appraiser received a tow bill with a four hour minimum charge that totaled $1,200. The circumstances involved a vehicle slamming into a utility pole, causing an alleged fluid spill that required a disposal drum and charges for cleanup cost and disposal.

“It was very heavily itemized,” Bodoni said of the bill.

The field adjuster decided to revisit the scene and found the spill still there, along the curb. The adjuster took a photo and used it in negotiations with the towing contractor. The bill was reduced to $503.

The second invoice received involved an insured who was also a MetLife agent, Bodoni said. He denied his vehicle ever leaked though the $1,300 tow bill reflected a charge for a bag of absorbent, drum and included the four hour minimum charge.

The third invoice involved an insured who was a firefighter, someone experienced in handling cleanups. He didn’t see the battery acid leak described on the tow bill. According to Bodoni, because of the alleged leak the towing company refused to tow the vehicle, stating that it was a public hazard. A field adjuster sent out to the scene found no evidence of a leak or cleanup. Photos were taken and the bill was negotiated from $1,732 down to $252.

The first three invoices came out of the same company, Bodoni said.

A result of MetLife’s tow bill scrutiny program, the company began requiring that tow companies take before and after photos documenting spills.

One way to combat inflated charges on tow bills is by reviewing the Department of Environmental Protection website for the applicable state. The department provides information on what constitutes a hazardous or toxic material, Bodoni said. Antifreeze is not considered toxic or hazardous. An adjuster may even find typical charges for cleanup. Local fire departments are also good sources, Bodoni said.

Overall, the actual towing charges seemed reasonable, Bodoni said. Of the more than 20 cases reviewed, $25,000 was billed as hazardous material cleanup and just under $10,000 was paid due to bills being negotiated or denied. According to Bodoni, there may be a deterrence effect as bills from local towers now reflect a $45 charge for environmental cleanup.