Angry investors are seeing far fewer financial benefits from lawsuits accusing corporate America of securities fraud, but may be on the cusp of a turnaround. 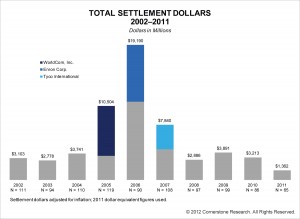 The number and size of securities fraud settlements that won final U.S. court approval fell in 2011 to the lowest in a decade, amid a drop in cases linked to accounting problems and U.S. Securities & Exchange Commission enforcement activity.

The dollar amount is less than half the $2.78 billion recovered in 2003, which had been the lowest since the adoption the prior year of the Sarbanes-Oxley corporate governance law.

Still, Laura Simmons, a business professor at the College of William & Mary and co-author of the study, said large settlements involving American International Group Inc. and other companies, as well as increased SEC enforcement activity, may make 2012 a more rewarding year for investors.

“As we look at the potential impact of whistleblower lawsuits, we expect a further increase in SEC activity, which could result in a greater amount of private settlements,” she said in an interview.

Last year, the SEC filed 735 enforcement cases, up 8.6 percent from 2010 and the most in its history, according to the regulator’s annual report.

The largest 2011 settlement in Cornerstone’s study was a $208.5 million accord by officers, directors, underwriters and an auditor for Washington Mutual Inc., the largest U.S. bank or thrift to fail.

“Lawyers will debate whether this decline is a result of plaintiffs having brought weaker claims or pro-defendant changes in the legal regime, or some combination,” Joseph Grundfest, a Stanford University law professor who works with Cornerstone, said in a statement. “The really big litigation bucks were not in the class-action securities fraud market in 2011.”

Simmons said the drop in accounting-related cases may stem from fewer restatements, which in turn may be attributed in part to improved corporate governance under Sarbanes-Oxley.

She also said that some plaintiffs’ lawyers may have focused more in recent years on housing-related litigation, including the sale of risky mortgage-backed securities, rather than more traditional securities fraud cases.

Settlement totals for 2012 will include AIG’s $725 million settlement to resolve claims accusing the insurer of accounting fraud and stock price manipulation.

The peak years for settlements were 2005 and 2006, when settlements over WorldCom Inc.’s and Enron Corp.’s collapses contributed to respective total payouts of $10.5 billion and $19.19 billion, Cornerstone said.

The full text of the report is available at the Cornerstone Research website at www.cornerstone.com/post_reform_act_settlements.