Trucking companies are going to court to fight Obama Administration rules designed to assure that commercial truckers on the road get proper rest. 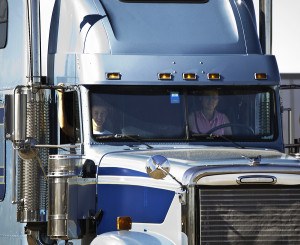 The American Trucking Association said it filed a petition this week with the U.S. Circuit Court of Appeals for the District of Columbia asking the court to review the Federal Motor Carrier Safety Administration’s recently published final rule changing the hours-of-service regulations for commercial truck drivers.

The trucking industry group maintains that the new rules are based on faulty assumptions and research and that any benefits are outweighed by the extra costs they will incur.

ATA also said the new rules are not necessary because rules already in place are working to reduce crashes.

FMCSA’s new hours-of-service (HOS) rule reduces by 12 hours the maximum number of hours a truck driver can work within a week. Under the old rule, truck drivers could work on average up to 82 hours within a seven-day period. The new HOS final rule limits a driver’s work week to 70 hours. It also mandates a 30 minute rest period within every eight hour period.

“We regret that FMCSA and the Obama administration have put ATA and its member companies in a position to take this legal action,” ATA President and CEO Bill Graves said.

“The rules that have been in place since 2004 have contributed to unprecedented improvement in highway safety. The law is clear about what steps FMCSA must undertake to change the rules and we cannot allow this rulemaking, which was fueled by changed assumptions and analyses that do not meet the required legal standards, to remain unchallenged.”

Graves said his group wants to resolve the issue so that government and industry resources can be focused on “safety initiatives that will have a far greater impact on highway safety.”

ATA said it will, however, support FMCSA’s move toward mandated electronic on-board recorders to ensure greater compliance with the current HOS rules.

ATA said it also supports a new government requirement for large trucks to be electronically speed limited; a return to a national maximum speed limit of 65 mph for all vehicles; and greater deployment of automated speed and traffic enforcement technologies.

The Department of Transportation’s FMSCA announced the HOS changes last December as a way to help prevent fatigue-related truck crashes.

“This final rule is the culmination of the most extensive and transparent public outreach effort in our agency’s history,” said FMCSA Administrator Anne S. Ferro at the time. “With robust input from all areas of the trucking community, coupled with the latest scientific research, we carefully crafted a rule acknowledging that when truckers are rested, alert and focused on safety, it makes our roadways safer.”

The new rules, while criticized by the industry, fell short of what some safety advocates wanted. Advocates had opposed letting truckers stay on the road for 11 hours per day but the FMSCA retain the 11-hour daily driving limit. FMCSA has said it will continue to examine any risks associated with the 11 hours of driving time.

In addition to limiting number of hours truckers may work in a week to 70, the FMSCA’s revised rules say that truck drivers cannot drive after working eight hours without first taking a break of at least 30 minutes. Drivers can take the 30-minute break whenever they need rest during the eight-hour window.

The rules also require truck drivers who maximize their weekly work hours to take at least two nights’ rest when their 24-hour body clock demands sleep the most – from 1:00 a.m. to 5:00 a.m. This rest requirement is part of the rule’s “34-hour restart” provision that allows drivers to restart the clock on their work week by taking at least 34 consecutive hours off-duty. Drivers may use the restart provision only once during a seven-day period.

Trucking companies that allow drivers to exceed the 11-hour driving limit by three or more hours could be fined $11,000 per offense, and the drivers themselves could face civil penalties of up to $2,750 for each offense.

Commercial truck drivers and companies must comply with the new HOS requirements by July 1, 2013. The regulation is available on FMCSA’s website here.