Firefighters in Ocala, Fla., found Hanna, a 2-year-old Siamese cat, lying in a smoky bedroom, unconscious and not breathing. Believing her dead, they carried the cat outside. Then Hanna moved her head.

Firefighter Eric Morton recalls rubbing her belly and giving her oxygen through a mask designed for people. Without a proper fit to her face, not much happened. A fellow firefighter reminded him that the crew also had a pet oxygen mask. 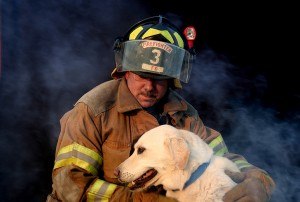 “As soon as I put that mask on the cat, it started almost immediately to come around,” Morton says. “She started to open her eyes and look around.” He kept it on her until animal control officers arrived, and by then, he says, Hanna “was like a normal cat.”

“It was pretty cool to see the cat come through,” he says.

Hanna’s owner, who was hospitalized with serious burns in the May 2010 fire, later paid Morton a visit to thank him for saving her pet, he said.

While pet oxygen masks have been used for decades by veterinarians in offices and hospitals, their use in the field by first responders – firefighters, paramedics and animal rescue teams – has been building for a decade, experts say.

The cone-shaped masks are designed with enough depth to fit over an animal’s nose and mouth, making the delivery of oxygen more effective than it is with masks made for people’s flatter faces. The pet masks have a rubber seal that creates a snug fit around the snout. Rescuers have improvised with human masks on pets with mixed results.

Just removing an animal from a smoky fire isn’t always enough. As with people, the earlier that oxygen is delivered to combat poisonous carbon monoxide, the better for those animals that wouldn’t otherwise survive the trip to the hospital.

“Immediate oxygen therapy can make the difference between life and death in severely affected pets,” says Elke Rudloff, an emergency and critical care veterinarian outside Milwaukee.

And for people whose homes and possessions have gone up in flames, seeing their pet saved, sometimes right before their eyes, can be a bright spot in a tragedy.

“Most people are hugging the pet to death because they’re so happy,” says Ines de Pablo, whose company Wag’n Enterprises sells the masks at-cost to first responders. The feeling, she said, is, “We lost everything else but at least my best friend is now saved.”

Though advocates would like to see every first responder equipped with pet masks, they are not standard. Some emergency agencies don’t have the money; others might not know about the masks.

“I think it’s great, and I think it’s too slow,” Rudloff says of efforts to get pet oxygen masks in the field.

In communities where first responders do have them, they usually were donated by pet lovers, animal groups, vets, pet-related businesses, scouting groups and the like, says Rudloff, president of the Veterinary Emergency and Critical Care Society.

In Long Beach, Calif., the Friends of Long Beach Animals donated masks to the fire department, which used one last year to save a dog found near death in a house fire.

“People that know those are available, it makes them feel more comfortable to know their pets are also considered part of the family,” says Shirley Vaughan, the group’s president.

While pets have the advantage of being low to the ground in case of a fire, they can’t open doors to flee and some, especially cats, are inclined to hide in an emergency, which often prolongs their time in a smoky space, says Elizabeth Rozanski, section head for critical care at Tufts University’s Foster Hospital for Small Animals, in Grafton, Mass.

It’s not known how many pets perish in fires every year. The U.S. Fire Administration, which estimated that 2,555 people died in house fires nationwide in 2010, does not track pet deaths. Unconfirmed estimates put the figure in the tens of thousands.

It’s also unclear how many of the approximately 30,000 fire departments in the United States have the pet masks.

Pets America, a San Diego-based nonprofit group, has sold thousands in the United States and abroad since 2006, says CEO Rachel Kowalski. Wag’n Enterprises, a pet emergency management company in Herndon, Va., has sold about 3,500 kits to about 1,200 departments in the United States and Canada since 2008. Both groups offer kits that include three different sized masks, the largest of which can fit a newborn foal.

Wag’n’s kits for first responders cost $70 each; civilian customers pay $95, with the $25 difference going toward masks for departments that lack funding. Pets America charges $85 or $95 per kit, depending on how many are ordered.

“More and more departments are getting the idea,” she says. “They’re seeing that it definitely makes a difference.”

News stories have touted the use of the masks: a cat resuscitated in Seattle in January, a dog and her four tiny 9-day-old puppies saved in Cleveland in October 2010, and a dog in Shawnee, Okla., who was found under a bed and was revived after 45 minutes of oxygen in February 2011.

Support for the masks is not universal. De Pablo says critics have called them a waste of money, and have said firefighters should not be saving animals. Although most fire stations were thankful to receive the donated masks, a few refused to accept them because they didn’t want the extra equipment or responsibility, Kowalski says.

Faced with shrinking budgets and layoffs, many fire departments around the country do not have money for extras like pet masks, says Gary Ludwig, who heads the EMS section of the International Association of Fire Chiefs. But he believes most firefighters would welcome the equipment, and are committed to helping save pet lives.

“A life is a life,” says Ludwig, a deputy fire chief in Memphis, Tenn. “We prioritize a human life, but if we can help a distressed animal, we’re going to do that.”