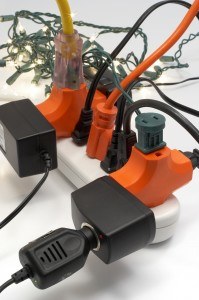 Though summer weather is associated with devastating catastrophe losses, the winter holiday season can be equally busy for insurance adjusters.

The third-largest cause of catastrophic losses behind hurricanes and tornadoes, winter storms resulted in almost $26 billion in insured losses between 1991 and 2010, the Insurance Services Office (ISO) reported.

According to industry experts, fires, burst pipes, and traffic accidents lead the losses during the cold winter months.

While nearly one third of all residential fires occur during the winter, the greatest number of home candle fires happens on Christmas Day, according to the National Fire Protection Association (NFPA).

“Many fires occur when holiday decorations, such as centerpieces, come into contact with a lit candle,” said Marty Ahrens of the NFPA.

Winter house fires can also start from too many holiday lights plugged into an outlet, portable heaters or fireplaces left on all night.

“According to the U.S. Fire Administration and the National Fire Protection Association more than 100,000 structural fires causing more than $1.7 billion in damage occur during the winter months,” said Malcolm Stone, director of marketing and communications for Paul Davis Restoration Inc. “The number one cause is cooking, with heating being the second most common cause.”

“Fires are common from lots of overloaded electric cords and more use of candles,” said Tracy Bachtell, senior vice president of Business Development for Paul Davis. “Turkey fryers cause a great number of fires and injuries. Furnace puff backs can often cause fires with first time use of furnaces during the colder months, same with space heaters.”

According to the National Fire Protection Agency (NFPA), U.S. fire departments respond to over a thousand fires each year in which a deep fryer in involved. The NFPA says deep fryer fires result in more than $15 million in property damage each year.

“Woodburning stove losses were popular in the 70s and 80s, but fewer are being used today,” Bachtell said.

Fires aren’t the only losses associated with the winter season.

According to the Insurance Information Institute (III), water damage and freezing was the second most claimed homeowners’ loss between 2005 and 2009.

“The most common type of loss is water damage due to burst pipes that are not properly insulated from the cold,” Stone said. “The damage from these types of losses can be significant, especially…if it occurs in an unoccupied vacation home or rental property.”

“Ice dams are another typical loss that occurs during winter,” said Stone. “However, the effects usually go unnoticed for weeks or months afterwards. This damage occurs when water freezes and thaws several times during the winter. The melting water runs down to the edge of the roof and freezes creating an ice dam. Additional water has nowhere to go and is forced down into the walls of the home – damaging dry wall and insulation.”

Of the most common losses encountered during the holiday season, Bachtell says most are repairable. “Water, soot and smoke require emergency response to repair. Time causes more damage. Most smoke is acidic, so time is critical on these losses,” he said.

According to Stone, in the case of water damage due to a pipe burst, the water is what the industry calls category 1 or “clean” water.

“Obviously, carpet, padding and flooring get wet along with furniture, clothing and other household furnishings”, Stone said. “It is not uncommon for the water to ‘wick-up’ dry wall. In these cases, most of the damage is reparable without replacing building materials or contents.”

“For fire losses, most burned or scorched building material and contents must be removed and replaced. However, materials and items damaged by smoke and soot can be cleaned and deodorized,” Stone said.

Bachtell said there are some things experienced or new adjusters arriving at a scene involving fire or water damage around the holidays might keep in mind.

“Understand that the holidays are very stressful and people are going to be more traumatized compared to other times of the year. Plus, when a living room full of wrapped presents is destroyed, it is a very sad day. Time sensitivity is increased and claims people and restoration industry professionals may be more likely to take time off for the holidays. So, it could be a time when supply and demand is going to be challenged,” Bachtell said.

Stone said he thinks adjusters need to keep up with new techniques and take advantage of educational information.

“As the insurance restoration industry continues to mature, more and more information and training is available so the adjuster community is better prepared than ever to deal with these loss scenarios,” Stone said. “However, we still see situations where structures could have been saved using applied structural drying and contents and personal belongings that could have been cleaned and restored. The piece of advice we would give an adjuster is to ask the restoration company for their input regarding the loss. If that company is certified by The Clean Trust and experienced with contents restoration, they will get the best results.”

The effects of the winter season are not limited to commercial and residential property claims. Adjusters may see a rise in auto, workers’ compensation and liability claims, such as slip and fall injuries, especially in certain regions of the U.S. susceptible to inclement weather.

According to the National Research Council, bad weather-related driving conditions are associated with 7,000 fatalities, 800,000 injuries, and more than 1.5 million vehicular crashes annually in the U.S.

While wintery weather conditions may be associated mainly with the Northwest, Midwest, and East Coast regions of the U.S., other regions should still remain prepared. Atlanta, Ga., Mayor Kasim Reed is reportedly taking a proactive approach, increasing the number of snowplows and sand spreaders, as a result of the January 2011 winter storm that stranded drivers and caused more than 1700 accidents.

Slip and fall injuries are the third leading cause of workplace injuries, according to the U.S. Bureau of Labor and Statistics. Even the southern state of Alabama isn’t immune to slip and fall claims. The Alabama Municipal Insurance Corp. reportedly paid $1.9 million in incurred slip and fall losses from 2000 to 2007 under the general liability coverage. The average payment per claim was $4,751.