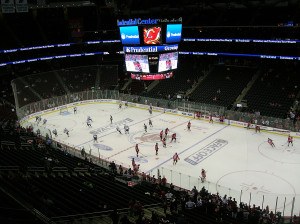 NHL Commissioner Gary Bettman says there is not enough data yet to draw conclusions about the link between concussions and a degenerative brain ailment that has been found in four dead ice hockey players.

The league wrapped up its Board of Governors meetings in California on Tuesday, a day after The New York Times reported that former New York Rangers enforcer Derek Boogaard suffered from chronic traumatic encephalopathy, an ailment related to Alzheimer’s disease.

The 28-year-old Boogaard, who died in May of an accidental overdose of alcohol and oxycodone, was found to have had CTE – which can be diagnosed only after the death of the patient. Boogaard is the fourth former NHL player found to have CTE by Boston University’s Center for the Study of Traumatic Encephalopathy.

“They’re still looking at a very limited database,” Bettman said. “There’s no control element because you have to look at everything that went on in a person’s life before you can make a judgment as to what a brain may show when you open it up. … There are no easy answers yet. I think it’s unfortunate that people use tragedies to jump to conclusions that probably at this stage aren’t supported.”

The disease was more advanced in Boogaard than it was in famed enforcer Bob Probert, who died of heart failure in 2010 at 45. He played 16 seasons in the NHL and often struggled with alcohol and drug addiction.

Reggie Fleming, who was 73, and 59-year-old Rick Martin, were other players who were found to have CTE.

Robert Stern, the co-director of the center at BU, said in an email that CTE research is still in its infancy but that all confirmed cases of CTE are in people who have had a history of repetitive brain trauma earlier in their lives.

Stern said many people with a history of repeated brain trauma do not develop CTE and it has not been determined why some people get the disease and others do not.

“We cannot ever draw a line of causality between a specific type of activity and developing the disease,” Stern said. “And specific policies and rule changes should not be made without adequate scientific knowledge to back it up.”

But he said that if repetitive brain trauma even contributes to the development of CTE in some people, it would be appropriate to reduce exposure to brain trauma.

Don Fehr, executive director of the NHL Players’ Association, said the union would be discussing the information with its players.

“The findings released by Boston University regarding CTE found in Derek Boogaard’s brain, and the forthcoming medical journal article, should be seriously considered by everyone associated with the game,” he said.

Bettman points out many changes the league has made, including cracking down on hits to the head, making it mandatory for players showing concussion symptoms to be examined by a doctor in a quiet area and installing safer boards and glass at its arenas.

He reported that concussions were down about one-third so far this season, but there was no way to eliminate them entirely.

“Even if it’s a legal hit, it can lead to a concussion,” Bettman said. “We play a very fast-paced, physical game in a close environment. I think people need to take a deep breath and not overreact. It’s important to react and it’s something we’ll monitor closely.”

Even though the players found to have CTE were enforcers during their careers, Bettman said there was no discussion at these meetings about trying to eliminate fighting. He said he considers head trauma that comes from fighting different from injuries that come from hits because fighters are willing combatants and not taken by surprise.