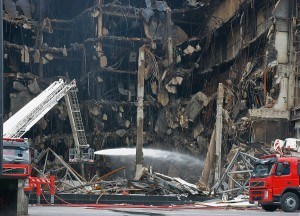 Conducting a successful large loss fire investigation requires a combination of pre-planning and cooperation in dealings with public sector officials.

It also means having previously identified a qualified expert familiar with large, not small, fire losses.

Immediate attention to an expert’s qualifications provides an adjuster or carrier the opportunity to retain an expert in advance of a loss, giving an adjuster a leg up during an investigation, the presenters said. This way, an adjuster avoids a situation where qualified experts have already been retained by other parties involved in the claim.

The presenters recommended having a screening or vetting process for experts in place that includes:

Adjusters and carriers should screen by individual investigator, not by firm, the presenters said. They also recommended knowing the lab the expert uses for tests and how evidence is stored.

Things to Consider During a Fire Investigation

According to the presenters, if an adjuster or expert is on scene during fire suppression, he or she should make sure to photograph the crowd, as well as interview witnesses, including first responders. “In a couple of cases I’ve photographed the arsonist,” said M. Dixon Robin, special agent and certified fire investigator with the Bureau of Alcohol, Tobacco, Firearms and Explosives.

While firefighters work to extinguish the fire, adjusters and experts can work to gather zoning board and planning documents, assess the presence of surveillance cameras and site security, research recent law enforcement activity, and find out who is responsible for property maintenance.

The presenters said it is acceptable to videotape a fire scene during an investigation; however, they did caution adjusters to make sure that the audio is in the off position, since early discussions of a cause may not be part of the final determination.

Coordinating an investigation with public sector officials is extremely important, according to the presenters. Public agencies usually have standard procedures in place for processing a large fire loss. They said these should not be secret, they can be shared with the adjuster or retained expert on scene.

Public agencies will grant private sector investigators limited access to the scene in order to prevent spoliation. Instead of seeing this as a roadblock, adjusters should maintain cooperation. Knowing that experts and adjusters will be bound by the rules of the scene and escorted by law enforcement should help an adjuster prepare in advance. Have a helmet and respirator on hand, Robins said. OSHA may ask for hazard documentation, like certifications and training. He recommended taking these to the scene every time; otherwise an expert may not gain access to a scene.

Because local agencies don’t have the time or money to do testing, Robins and Karasinski said adjusters should include them in on the testing. “Always invite a public sector fire investigator to lab exams to educate them,” Karasinski said.

Robins recommended that adjusters be aware of contamination issues. “Know what heavy equipment was used on a scene by public investigators,” he said. Knowing whether a piece of equipment is gas or diesel-powered can help distinguish contaminants from accelerants that may have been used to start the fire.

As a courtesy, Robins recommended adjusters give a heads-up to public investigators regarding any interviews planned. “Arson is such a confession driven crime,” Robins said. “If you schedule it [an examination under oath], sometimes they will lawyer up.”

Once the Fire is Out

An adjuster needs to take control of a large fire scene immediately upon receipt of the reported claim. “As the adjuster handling the case, you need to establish control of the scene and you need to do it right away,” said Michael J. Famiglietti, large loss team manager for the New England region of Liberty Mutual Insurance Companies. He said this is critical to subrogation.

If an investigation concentrates on a portion of a building, it is important to mitigate other damage. “Secure a section of a building and mitigate the rest of it while third party carriers are put on notice and investigation continues,” Famiglietti said. Subrogation recovery may not be viable if mitigation is not done in a timely fashion, he said.

Karasinski recommended involving the liability team early on in the claim. “Just because a fire starts at your location doesn’t mean it’s your fault,” he said. “It’s important to have the liability team consider liability exposure when you are on the scene.”

To enhance any subrogation that might be pursued, Karasinski reiterated the necessity of getting the liability team on board early to investigate. As an example, the presenters discussed an investigation involving an apartment building fire. At first glance, it appeared a cigarette discarded in a flower pot on the porch nine hours before started the fire. But arc mapping determined the cause of the fire was the light fixture above the flower pot.

Karasinski also suggested insurers review the number of similar losses in the aggregate, including ones handled in other states. If similar losses are found, adjusters will need to determine how many involve the same manufacturer. In the case of similar losses, using the same people for each claim will help carriers in their pursuit of subrogation. “It’s extremely important to use the same experts, same legal team, same lab, and you are going to start winning cases,” he said.

Famiglietti recommended adjusters be proactive during a large loss fire investigation. “Think of the tools and resources that you need,” he said.