The average total cost per workers’ compensation claim in Illinois grew annually anywhere from 1 to 3 percent since 2012, according to a recent study by the Workers Compensation Research Institute (WCRI).

“Due to small to moderate changes in medical payments per claim, indemnity benefits per claim, and benefit delivery expenses per claim, the average total cost per workers’ compensation claim in Illinois grew annually about 1 to 3 percent after 2012,” said Ramona Tanabe, WCRI’s executive vice president and counsel. 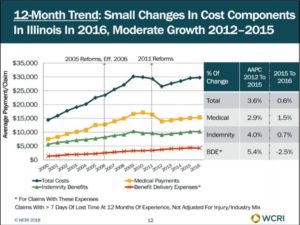 “Illinois’ results were higher than other study states on many metrics related to both medical payments and indemnity benefits. Illinois’ medical payments per workers’ compensation claim were driven by utilization of medical services and prices paid for these services while indemnity benefits per workers’ compensation claim reflected system features and processes related to permanent partial disability benefits and duration of temporary disability,” said Tanabe.

The following were among the study’s other findings:

For more information about this study or to purchase a copy, visit https://www.wcrinet.org/reports/compscope-benchmarks-for-illinois-18th-edition.