Chicago’s red-light cameras reduce serious injury crashes at intersections where they are placed and also have a measurable “spillover effect” that improves safety at intersections without cameras, according to a newly released Northwestern University Transportation Center study. 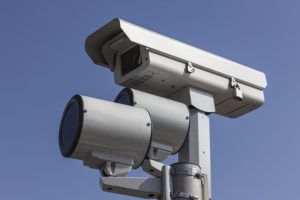 The report provides tools and analysis that can help the city identify existing and potential camera locations requiring further attention and notes that enforcing RLC violations occurring within fractions of a second after the light turns red might not provide significant safety benefits.

Hani S. Mahmassani, director of the Transportation Center, led the study on the effectiveness of the RLC program using available safety data. The team, including an expert advisory panel of traffic safety experts from across the country, conducted a rigorous analysis of existing RLC enforcement practices before arriving at its recommendations.

Based on the analysis, the report recommends continuation of the program. “Quantitative studies conducted in this project demonstrate significant safety benefits of the current RLC program,” the report concluded.

The study was authorized by the Chicago City Council and commissioned by the Chicago Department of Transportation (CDOT). Commissioning the independent academic report was a major step CDOT took toward reforming the program in 2015 in cooperation with the City Council.

Mahmassani’s RLC study team, including Northwestern colleague Joseph L. Schofer, corroborated the findings of other national studies that have shown camera enforcement correlates with an overall decrease in injury-producing crashes.

Mahmassani is the William A. Patterson Distinguished Chair in Transportation in the McCormick School of Engineering. Schofer is a faculty associate of the Transportation Center and a professor of civil and environmental engineering and an associate dean at McCormick.

The report found that injury-producing crashes decreased by about 10 percent because of the camera program; more dangerous angle and/or turn crashes decreased by 19 percent. The study also found less dangerous and less frequent rear-end crashes increased by 14 percent, consistent with experience in other cities. For this portion of the study, the researchers used data from 2005 to 2007 (before red-light cameras were deployed) and data from 2010 to 2012 (after red-light cameras were mostly deployed).

Federally sponsored traffic safety research has shown that angle and turn crashes have a lost productivity cost to society that is about five times greater than the cost attributed to damage from rear-end crashes.