The radar screens in the jetliner show massive storm systems around Wichita and Dodge City, Kansas, growing and beginning to merge.

Any commercial aircraft in the area have already diverted. But this DC-8 heads right between the storms. Then it flies circles around them, The Kansas City Star reports.

“Everybody is trying to get away. We’re going towards it,” flight navigator Walter Klein says. “They’re thinking, `What’s wrong with these guys?”‘

No thrill-seekers here. These storm chasers are on a scientific mission. They’re trying to figure out how to better predict a little-examined peculiarity of summer weather on the Great Plains: its enormous, and often ferocious, nighttime thunderstorms. 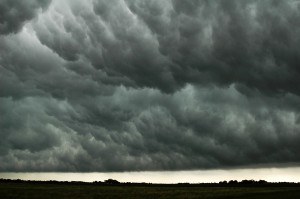 The voluminous data they’re gathering – information that may take years to analyze – will be used to improve computer models to better foretell where nighttime storms will occur and how much rain will fall. More precise predictions would better warn the public about flooding and could help farmers decide when to plant or harvest.

“There’s a lot of uncertainty about when these storms are going to form, if these storms will form and where they will form,” said Richard Ferrare, NASA’s chief scientist on the mission.

Right now, the bull’s-eye for a storm prediction may be the entire state of Kansas.

“We want to shrink that,” he said.

Since the beginning of June, Ferrare and other researchers from NASA, the National Oceanographic and Atmospheric Administration and the National Center for Atmospheric Research, along with scientists and students from a long list of research laboratories and universities, have been in Hays. They’re gathering data from weather balloons, ground stations, fleets of mobile weather stations and radar trucks, and three aircraft.

The $13.5 million project, paid for largely by the National Science Foundation, goes by PECAN, for Plains Elevated Convection at Night.

NASA scientists spent between June 1 and July 15 flying above sections of Kansas, Nebraska, Oklahoma and Texas on a modified DC-8 jetliner collecting data before and during nighttime thunderstorms to learn more about how they form, how they become severe and how to predict them more accurately.

NOAA’s contribution includes a small prop plane that flies into trailing regions of the storms. It’s the job of NASA’s jetliner to skirt the storms, allowing its laser to study the “clear air” that may develop into bad weather.

Most of the DC-8’s flights have been in Kansas, Nebraska and northern Oklahoma, but they have ranged as far as South Dakota, Iowa and Missouri, chasing after stormy weather.

Monday night, on flight number 8, the target was a rectangle of central Kansas bordered roughly by Salina down to Wichita on the east and by Goodland south to Ulysses on the west. Forecasters had decided by midafternoon that it was the area most likely to yield weather worth studying.

Klein described the zigzag course the plane will take as “mowing the lawn in front of the storms.”

“We don’t penetrate,” he said. “That would tear the wings off the aircraft. It’s the hail, it’s the downdrafts, it’s the turbulence. That’s dangerous, very dangerous.”

In most places, thunderstorms typically start in the afternoon and are tied to Earth’s surface. Air warmed at ground level rises and meets falling air cooled at higher altitudes.

The storms are caused by fast-moving, low-altitude wind currents from Texas as they move north into Oklahoma and Kansas, Ferrare said. If these warm, moisture-rich jets run into cooler air or a low-pressure area, they can build into thunderstorms that start 5,000 to 10,000 feet above the surface.

Midwest thunderstorms often collect together into huge complexes called mesoscale convective systems. They can last for hours and travel hundreds of miles, usually following a west-to-east route. For example, by Monday afternoon a storm that had started in Minnesota the night before had made its way to Indiana.

Kansas was chosen for the PECAN project because it’s at the center of this storm activity. It’s also flat and has relatively few trees, giving surface radar a clear view of weather conditions. And the Salina airport’s long runway can accommodate the 1960s-era DC-8.

The jetliner took off just before 8 p.m. Monday, climbing steadily to 28,000 feet over a patchwork of farm fields for what was planned to be an eight-hour flight. In the distance, a range of cumulus clouds was lit orange by the sun.

The plane headed southwest toward large storms brewing around Wichita and Dodge City. Satellite feeds and instruments onboard revealed an 80-mile line of thunderstorms to the south, a little more than 100 miles away, and moving slowly to the southeast.

NASA acquired the DC-8 in 1986. The four-engine jetliner, based at the Armstrong Flight Research Facility in Palmdale, Calif., is a flying laboratory that’s been used for scientific missions around the world, studying weather, atmospheric radiation, melting polar ice caps, even ancient Mayan ruins in the Guatemalan rain forest. On the cabin wall, the crew has pasted dozens of stickers from far-flung outposts the plane has visited – Hawaii, Alaska, Fiji, Singapore and Pago Pago.

Seating is first class. And like other commercial jetliners from that era, there’s plenty of legroom. But that’s about it for amenities. Most of the seats and overhead bins have been removed to make way for navigation gear and scientific instruments. Utilitarian footlockers and instrument racks are bolted to the floor.

Safety measures are serious. Everyone gets a smoke hood, in case of fire. Seatbelts have shoulder harnesses.

Ferrare sat toward the aft of the cabin, keeping track of the storms displayed on his computer screen. Across the aisle is a 6-foot-long laser that is the key to NASA’s role on this mission. The system was developed in the early 1990s and custom-built at NASA’s Langley Research Center in Hampton, Va.

The laser shoots its invisible light beams down to Earth’s surface and upward as high as 50,000 to 60,000 feet. It provides details of the variation in moisture levels in clear air – a thick cloud can stop its beams like a brick wall. Layers of air with lots of water vapor may be found at different altitudes. The higher altitudes may be where the Midwest’s nighttime storms start.

“What makes it difficult for forecasting is that most of the measurements we get are near the surface,” Ferrare said.

An atmospheric scientist with a background in physics, Ferrare is based at Langley. He has flown the DC-8 on numerous missions, to Tahiti and Easter Island and over the North Pole to measure ozone depletion in the stratosphere. It’s been his lifelong ambition.

Many of the NASA flight crew are retired military.

Beauregard said he had no desire to go into commercial aviation. Flying the DC-8 is “a real mission,” he said.

“We can use this airplane to help scientists succeed. It does make a difference.”

Because he’s been with NASA for just three months, Beauregard is the new guy.

Co-pilot Bill Brockett is the veteran. He left Pan Am for NASA in 1987, attracted by the variety of aircraft the agency would let him fly.

“There’s no place in the civilian world where you can do that,” he said.

Brockett was in the aft galley on a midnight tea break – he takes it with milk, a preference he attributes to his Irish mother – when he recounted some of his experiences flying the DC-8.

Shortly after arriving at NASA, Brockett took the plane over the South Pole to measure whether the destruction of ozone in Earth’s atmosphere was occurring at the high altitudes where the gas provides a protective shield from the sun. Data from that mission contributed to the Montreal Protocol, the international agreement to phase out the production of chemicals that contributed to ozone depletion.

More recently he has flown over Antarctica, looking for signs of shrinkage of the polar ice cap.

“The scientists tell you many parts of the ice cap are decreasing rapidly, but as a whole they can’t say if it’s increasing or decreasing.” Then he added: “But most believe it’s shrinking.”

In the cockpit, Brockett stayed busy on his iPad, making constant course corrections to follow the storms and alerting air traffic controllers to the changes.

About an hour later came word from the ground that seriously bad weather was headed toward Salina. The plane needed to cut its flight short by about 90 minutes or risk being diverted to another airport. That left extra time for the DC-8’s final PECAN flight Tuesday night.

For all the storms and course corrections, the flight was remarkably serene.

“We try to move to keep us in clear air all the way to the ground,” Brockett said.

But sometimes the weather couldn’t be avoided. At one point, the plane hit a cloud deck. Darkness engulfed the cockpit. Turbulence rattled the plane.

“Your passenger comfort is not one of our mission objectives,” he said dryly.