The same weather pattern that made the West warm and dry and the Northeast cold and snowy has contributed to keeping the rest of the U.S. relatively free of tornadoes so far this year.

In the first two months of 2015, about 20 tornadoes occurred, compared with a 10-year average of 130, said Greg Carbin, a warning coordination meteorologist at the Storm Prediction Center in Norman, Oklahoma. And as of Monday there had been none in March, he said. 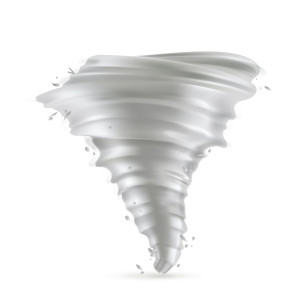 “We’re now in really new territory, as far as the last 60 years,” Carbin said by telephone. “We have never got this late into March without one tornado reported somewhere, and we have had zero.”

The whole thing has turned out to be a silver lining in an otherwise dark pattern that has put the West on the threshold of a fourth year of drought and left the East waiting for spring mercifully to arrive.

The last time March was this quiet was 1969, when the first tornado didn’t appear until the 23rd. Only four tornado watches have been issued in 2015, while 52 are typical by mid-March, the center said. Multiple tornadoes can occur in a watch area.

While the tornado drought is unprecedented, Carbin said he likes to stay away from the word record because the period of good data isn’t that long.

“One of the biggest difficulties we have is we can’t use the word ‘ever,’” Carbin said. “The record for tornadoes is half the length of our temperature record in this country. Temperature is much easier to measure than tornadoes.”

The mechanics of the weather pattern causing heat in the West and cold in the East are easy to trace — a ridge of high pressure in the eastern Pacific and a trough of low pressure across central North America have locked in place.

The pattern “is exactly the opposite of the pattern you need to get an active tornado period in late winter and early spring,” said Todd Crawford, a meteorologist at WSI in Andover, Massachusetts.

Severe weather is usually more common when the West is cool and the East is warm, Crawford said. The chances of that happening anytime soon look slim.

There is a high probability that temperatures will remain below normal in the eastern U.S. and higher in the West through April 5, according to the Climate Prediction Center in College Park, Maryland.

Aside from the drought, chill and lack of storms, the pattern also contributed to the lake-effect snows that buried towns south of Buffalo, N.Y., in several feet of snow in November, Carbin said.

“I think the big question is, how do we predict the persistence of these regimes?” Carbin said.

The chance it will break up increases as more sunlight falls in the Northern Hemisphere and spring marches on.

It also would take just a matter of days for the pattern to weaken enough to make conditions right for severe thunderstorms and possibly even tornadoes.

There are signs this may be happening.

Carbin said there’s a slight risk thunderstorms will break out across eastern Oklahoma, southwestern Missouri and northeastern Arkansas on Tuesday. That threat spreads Wednesday into parts of Texas and Illinois.

“The pattern isn’t one that screams tornadoes,” Carbin said. “But we could see an end of the lack of tornadoes in March by the end of this week.”

And if not then, well, April and May are typically when the the number of tornadoes in the U.S. really takes off. Until then, every day without a twister means a new mark in the record books.