Brenda O’Malley figured she’d get the police accident report and file an insurance claim after her teenage daughter got into a car accident in Sheboygan Falls this past spring.

People in Wisconsin who find themselves in car accidents, arrested or the victim of a crime are having an increasingly tougher time obtaining police reports, key documents that offer an official narrative of events that can prove crucial for making insurance claims and learning who has been arrested and for what. 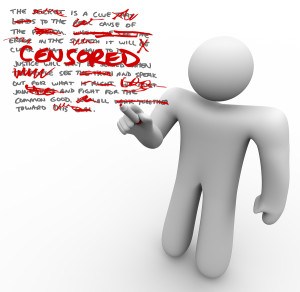 Police say a federal appeals court ruling in an Illinois case last year concluded law enforcement agencies cannot release information gleaned through motor vehicle records, including names, addresses, gender and other personal details. More Wisconsin agencies are pulling out their redacting pens before they hand out anything in hopes of avoiding lawsuits.

It’s unclear exactly how many police departments across the state have adopted a redaction policy, but Sheboygan Falls Police Chief Steven Riffel said more agencies are doing it than not.

“Every day another department tells me they’re going to the redaction policy,” Riffel, president of the Wisconsin Chiefs of Police Association, said. “The chiefs I talk to, I don’t necessarily know they really agree with not releasing the records. It’s a lot more work, more professional aggravation (to redact information from the reports). But we’re really between a rock and a hard place.”

Not only has the approach left people like the O’Malleys throwing up their hands, it’s got open government advocates fuming. They say the legal interpretation flies in the face of the state’s open records law and denies the public oversight of law enforcement operations.

“What they’re doing is basically turning our state’s tradition of open government on its head,” said Bill Lueders, president of the Wisconsin Freedom of Information Council.

The 1994 Driver’s Privacy Protection Act requires states to obtain consent before they release a driver’s personal information. The federal law was passed after an actress was killed in 1989 by a stalker who found her address through Department of Motor Vehicle records.

Three years ago, a man named Jason Senne sued the village of Palatine, Ill., for leaving a parking ticket on his car that listed his name, address, driver’s license number, birthdate, gender, height and weight. He claimed the disclosure violated the DPPA. A district court tossed the case and a 7th Circuit Court panel agreed. The full 7th Circuit Court heard the case and reversed the decision last year. Palatine has asked the U.S. Supreme Court to weigh in.

Wisconsin Attorney General J.B. Van Hollen released an informal opinion in 2008 saying the DPPA doesn’t restrict how state agencies use state DOT data, adding that Wisconsin’s open records law states the public is entitled to the greatest possible information about government. Van Hollen has declined to issue any further guidance in the wake of the Senne ruling, though, saying his office wants to see whether the Supreme Court takes action.

City attorneys around the state have been advising police to haul out their redacting pens to make sure they’re not sued. And they’ve been following that advice.

Milwaukee police have stopped posting traffic accident reports on their website. In northwestern Wisconsin, the New Richmond News has sued the city of New Richmond alleging police were redacting too much information, a violation of the state’s open records law.

New Richmond Police Chief Mark Samelstad wrote in a letter to the newspaper the redaction policy will stand because it complies with the law.

“While I may not agree with the Federal Courts decision on this issue, nonetheless I have an obligation to follow the court’s ruling,” he said.

It’s still possible to obtain complete crash reports directly from the state Department of Transportation, like Brenda O’Malley did. It generally takes 10 days for police to submit the paperwork to DOT, however, creating delays for those who request it.

More agencies also are redacting personal identifying details from incident reports, documents that offer narratives of crimes and the roles of those involved. The agencies argue that much of the blacked-out information is drawn from DOT records, triggering the federal driver’s privacy law, Riffel said.

U.S. Rep. Tom Petri, R-Fond du Lac, said he has received complaints from his constituents and would be willing to look at the issue.

“At some point it becomes important for the public to know about certain things, specifically accident reports which are used by insurance companies and others,” he said in a statement.

Brenda O’Malley, who finally used the accident report to secure an insurance payout for the damage to her daughter’s car, called the police interpretation unfair.

“I understand protecting people. I really do understand that in the world we live in. But in an accident you really need to know that information,” she said. “It just doesn’t seem right.”