The family of a National Hockey League player who died of an accidental overdose of pain medication and alcohol has filed a wrongful death lawsuit against the NHL, blaming it for brain damage he suffered as an enforcer and for his addiction to prescription painkillers.

Derek Boogaard, who was found dead on May 13, 2011, at age 28, was posthumously diagnosed with chronic traumatic encephalopathy, a degenerative brain ailment that can be caused by repeated blows to the head, according to the 55-page lawsuit filed in Cook County Circuit Court late Friday.

One of the attorneys who filed the lawsuit, William Gibbs, said Monday the NHL profited from Boogaard’s physical abilities as team doctors dispensed “pain pills like candy” after he suffered repeated injuries. 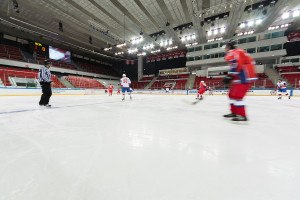 “The NHL drafted Derek Boogaard because it wanted his massive body to fight in order to enhance ratings, earnings and exposure,” Gibbs said. “Then, once he became addicted to these narcotics, the NHL promised his family that it would take care of him. It failed.”

“He was there protecting his teammates at all costs, but who was there to protect him?” Joanne Boogaard said in a statement release by her attorneys.

The lawsuit says the NHL couldn’t claim ignorance about the consequences to Boogaard.

“Prior to and during Derek Boogaard’s career, the NHL knew, or should have known, that the Enforcers/Fighters in the NHL had an increased risk of brain damage due to concussive and sub-concussive brain trauma and were particularly susceptible to addiction issues,” it says.

Boogaard scored only three goals in his six-season career in 277 regular season games but took part in at least 66 on-ice fights; in the 2008-2009 season with the Minnesota Wild, he received 1,021 prescriptions from NHL team physicians, dentists, trainers and staff, the lawsuit says.

In April, 2011, the NHL “knew, or should have known, that Derek Boogaard, a known drug addict, with probable brain damage due to concussive brain traumas sustained in NHF fights, was not complying with treatment (at a treatment center),” the suit alleges.

NHL Deputy Commissioner Bill Daly told The Associated Press in an email Sunday night that league has not received the lawsuit and generally does not comment on pending litigation. The suit was filed in Illinois in part because the NHL has a business interest in the state through the Chicago Blackhawks and Boogaard “engaged in one-ice fights during his NHL career” in Chicago, the filing says.

“To distill this to one sentence, you take a young man, you subject him to trauma, you give him pills for that trauma, he becomes addicted to those pills, you promise to treat him for that addiction, and you fail,” William Gibbs, attorney for the Boogaards, told The New York Times.

Boogaard was under contract with the New York Rangers at the time of his death. He played his first five NHL seasons with the Minnesota Wild and one season with the Rangers after signing a four-year, $6.5 million contract with New York in July 2010.

Boogaard sustained a concussion during his last game on Dec. 9, 2010. Known as one of the league’s toughest fighters, the 6-foot-7, 255-pound Boogaard played 277 NHL games, scored three goals and racked up 589 penalty minutes.

Boogaard’s family filed a lawsuit against the NHL Players Association last September, seeking $9.8 million, but it was dismissed this spring. The family said the union, after expressing interest in helping pursue a case against the league, missed a deadline for filing a grievance. A judge ruled the family waited too long to act and dismissed the case.

The latest lawsuit details the treatment Boogaard received from team doctors of the Rangers and Minnesota Wild, and the officials from the league’s Substance Abuse and Behavioral Health Program, which oversaw Boogaard’s care after he entered rehabilitation while playing for the Wild in 2009.