The penalties for ignoring that small stop sign extended from a school bus have drastically increased in Nebraska, but local officials say drivers continue to ignore the safety measure.

A change to the state law approved by the Legislature during its last session now makes passing a stopped school bus that is loading or unloading children a Class IV misdemeanor, punishable by up to a $500 fine and three-point deduction from a violator’s driver’s license.

The change, which became effective July 19, requires motorists approaching a bus from either the front or rear to remain stopped until the flashing red signal lights are turned off, stop sign is retracted and the bus begins to move. 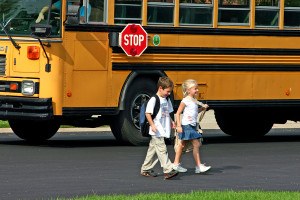 Despite the harsher penalties, representatives from Columbus Public Schools and Central Nebraska Community Services say motorists continue to drive around their buses all too often, which creates an unsafe environment for dozens of children transported each day.

“The general public isn’t familiar with the laws that pertain to school buses,” said Bill Garbers, transportation supervisor at CPS. “For them to be inconvenienced for them to stop, it’s easier for them to run through the stop sign.”

CPS buses transport about 92 preschool and special needs students each day along seven different routes, stopping at each child’s home.

While the routes are designed so no children have to cross the street, Garbers said vehicles passing stopped school buses are still a concern.

“We’re required to put that stop sign out and the public should be aware of that and they need to comply,” he said.

At Central Nebraska Community Services (CNCS), Transportation Coordinator Judi Griffiths said the issue is becoming more and more prevalent. Drivers there can witness up to a handful of occurrences each day on their routes, which run from 6:45 a.m. to 7 p.m.

Griffiths believes many drivers simply don’t fully understand the law, particularly that vehicles approaching a stopped school bus from the front are also required to abide by the stop sign.

The five buses used by CNCS are also equipped with child restraints, she said, which can make each stop a bit longer and frustrate other motorists.

“I just want to keep the safety of our kids in mind,” she said.

CNCS, which transports around 80 preschool-age children each day, uses a monitor to assist those who must cross the street at each stop.

The problem, Griffiths and Garbers said, is the law can be tough to enforce.

Griffiths said CNCS doesn’t want to have to take the major step of installing cameras on its buses.

According to Columbus Police Capt. Todd Thalken, the police department has conducted special enforcements focused on drivers who fail to stop for school buses, but none recently.

Thalken said it’s often difficult for a police officer to observe someone violating this law during normal patrols.

“It’s just a hard one for us to properly enforce,” he said.

Garbers said the buses typically take the same routes each day, so motorists can plan their trips on different streets if they don’t want to wait.