A northern Indiana town’s Fourth of July parade is marching forward after officials stepped up to ensure the event would go on. 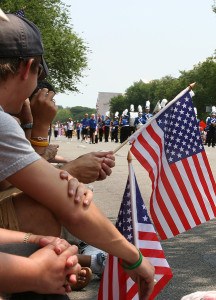 The Lions Club usually provides liability insurance for the annual event in the Cass County town of Walton but couldn’t afford the cost this year because membership is down. Any money raised is being used to repair a roof at the club’s offices.

Town Council President Patrick Robison said the board members found out about the insurance problems last week and decided that they could afford to cover the cost.

“We kind of made a rush decision and went for it,” Robison told the Pharos-Tribune.

Robison said council members just couldn’t imagine a Fourth of July without the parade in the town of about 1,000 people some 30 miles northeast of Lafayette.

“This parade has been so good in the past, and we hated to lose it over insurance issues,” Robison said.

Parade organizer Carol Woolever said the insurance is necessary in case of an accident but that she didn’t know of any claims having ever been filed.

“You just have to have liability insurance in case someone is kicked by horse or run over by a float or something like that,” Woolever said.

Dozens of groups already have entered this year’s parade, which Woolever said would have at least 40 antique tractors as well as the traditional vendors and parade units.