The Oshkosh Corp. Striker has garnered quite a bit of attention nationally in 2012 even though all but one of the roughly 60 sold thus far have been sold to international buyers.

The first of the airport rescue and fire fighting vehicles, unveiled in 2010 and first produced in late 2011, was sent to Redmond, Ore., but orders have since come in from South Korea, China, Poland, Singapore, Spain and the United Kingdom. 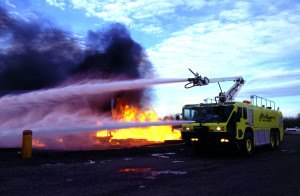 The vehicle’s increased storage capacity, ergonomic design that caters to two-per firefighting teams, seven-speed automatic transmission and its ability to spray water, foam or dry chemicals from pressurized cannons have made it popular with firefighters who helped design the vehicle, while it’s unique design and appearance has made it the object of onlookers’ curiosity and the subject of several television shows.

Oshkosh Corp. spokeswoman Kristin Michal said the company’s airport segment normally sells a total of 120 to 140 of the airport firefighting and rescue trucks, each year. The 60 Strikers already ordered this year puts the company well ahead of its normal pace.

“Our focus on this was global. Four years ago, 80 percent of our sales were domestic. Now they’re 70 percent international,” Michal said. “We developed the truck around European and Asian standards so that we could satisfy domestic and international standards.”

Strong early sales have made the Striker a welcome addition to Oshkosh’s stable of heavy-duty vehicles.

Oshkosh Corp. Senior Chief Engineer Jason Shively said the truck is popular with firefighters, who provided a great deal of input into how the vehicle was designed and where equipment is located. He added that the more than 1,000 customizable features on the vehicle help the company build each Striker to each airport’s needs and preferences.

“We typically do what the customer wants,” Shively said. “Everybody has their own ways to fight fires.”

The vehicle has also started to earn a following among the general public thanks to heavy media exposure in recent months.

“It’s a very different side of Oshkosh Corp. that people don’t always know a lot about,” Michal said. “It’s such a different vehicle, people often aren’t aware of it. It’s definitely not one of our usual products.”

That could be the very definition of an understatement.

Instead of the military greens and tans or even fire engine red, the Striker’s neon green makes it stick out among other vehicles Oshkosh Corp. builds. It features plenty of storage, easy operation for a two-person firefighting team, increased visibility, and easy access to fluid reservoirs and the engine compartment.

Michal said the company’s website garnered the second most hits in one day after BBC America’s “Richard Hammond’s Crash Course” featured the Striker in a recent segment. The show’s website still offers visitors a chance to play “Striker Inferno,” an online video game, on its homepage.

The Discovery Science channel also featured the vehicle in Season 2, Episode 3 of “Heavy Metal Task Force,” which continues to air periodically on the network and can be found online.

And Popular Science magazine highlighted the vehicle in its “How it Works” section in print and online.

The Striker will also make its big-screen debut on Aug. 3 when it makes an appearance in the reboot of “Total Recall” with Colin Farrell. Michal said the rescue vehicle was converted into a futuristic ambulance for the film.