Indiana officials said Tuesday that they would love to require safety belts on every school bus, but they just can’t afford it. 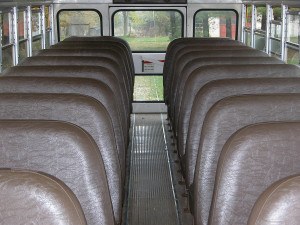 The comments from Michael LaRocco, the state education department’s director of school transportation, came a day after a deadly school bus crash in Indianapolis. State police said their initial investigations indicate nothing was wrong with the bus before it crashed into a railroad bridge, killing the driver and a 5-year-old student on board.

LaRocco said Monday’s accident was the first fatality of a school-age child riding or getting on or off an Indiana school bus since 2009.

LaRocco said it would cost about $160 million to equip all of Indiana’s 16,000 school buses with effective restraints, and neither the state nor individual districts can shoulder that cost, even incrementally.

“I like the idea of them,” LaRocco said. “But in a realistic world, it’s just not reasonably functional for us to do that.”

School buses are heavier than normal cars and distribute forces differently after crashes, so riders feel less of an impact. Buses are also designed so that the seats absorb some impact in a crash, protecting riders.

The bus was carrying 50 students to the Indianapolis Lighthouse Charter School when it collided with a concrete pillar. The impact tore apart the front end and scraped off part of the driver’s side of the bus.

Ten more students were injured in the crash. Two remain at Riley Hospital for Children in critical condition. Riley spokesman Gene Ford said Tuesday he had no details on their status.

Although Indianapolis police are leading the crash probe, Bursten said state police are responsible for investigating the condition of any school bus involved in a fatal crash.

“There is nothing at this point that indicates there was anything with the bus that contributed to the crash,” Bursten said. He said state police are still investigating whether Spencer had been licensed and certified to drive a school bus.

Phil Isenbarger, an attorney for bus owners Miller Transportation, said the company plans to conduct its own investigation. He said the bus passed an inspection earlier this year.

Spencer had been with the company since July 2010. Isenbarger said initial information pointed to no problems with the driver.

The bus was equipped with an on-board video camera, but Isenbarger said investigators were having issues downloading the video.

Indianapolis Metropolitan Police have interviewed a handful of witnesses and collected measurements from the crash site and are waiting for the results of the state police investigations, Officer Anthony Schneider said.

The driver of another school bus following the one that crashed told city police it wasn’t speeding and didn’t swerve before the collision.

Donasty’s mother, Danyelle Smith, said she had two daughters on the bus. The older of the two, 7-year-old Erielle Norris, survived.

“Cherish your babies, because you never know what’s going to happen. One day they’re here, the next day they’re gone,” she told Indianapolis television station WTHR.

State Rep. Robert Behning, a Republican from Indianapolis who chairs the House Education Committee, said he can’t remember any direct legislative push to require the restraints on buses in recent years. But he said it may come up next year, depending on whether media coverage continues or if another accident occurs.

Behning said it’s possible Indiana could use property tax money already being collected for the state’s fleet to cover any costs to install seat belts over time.

“For that child that died yesterday, that’s a life you can’t replace, and there was damage to other children both emotionally and physically,” Behning said. “If it’s something you do a year at a time, it’s not nearly as big of a fiscal undertaking.”

LaRocco said some districts are installing safety belts and covering the costs themselves. He worries that if the state were to make that a requirement of all public schools, many would just stop providing bus service rather than shoulder the cost.

“We’re talking about the safest ground transportation on the planet, bar none,” LaRocco said. “This was an extremely rare case for us.”