When it comes to safety, transportation statistics show it doesn’t get much better than a school bus. 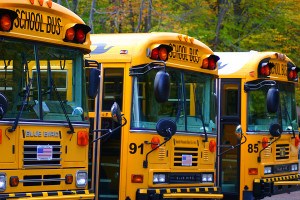 Tragedies like Thursday’s bus-dump truck crash that killed an 11-year-old Burlington County girl and critically injured her two sisters and a boy are extremely rare, according to National Highway Traffic Safety Administration statistics.

Each year, about 23.5 million children travel a collective 4.3 billion miles in some 450,000 school buses – and just five or six children die, according to the administration.

With high, padded seats with little room in between, buses are built to cushion impacts and prevent children from being thrown about, Dellinger said.

“They are very well constructed,” he said.

In fact, the NHTSA concludes that “American students are nearly eight times safer riding in a school bus than with their own parents and guardians in a car.”

The death of 11-year-old Isabelle Tezsla in rural Chesterfield on Thursday was the first incident where a student was killed while on a school bus in New Jersey in more than a decade, according to the state Department of Education.

The accident, which also injured Isabelle’s triplet sisters and an 11-year-old boy, occurred when a dump truck struck the bus, sending it spinning into a roadside pole. In all, 17 Chesterfield Elementary School students were injured.

An investigation into the crash is being led by the National Transportation Safety Board, which says its nine-member team “will examine any student-passenger protection issues associated with this crash.” The agency is interested in the crash because New Jersey is one of six states that requires seat-belt use on school buses, said Pete Kotowsky, an NTSB investigator-in-chief.

Before Thursday’s crash, a student was last killed on a bus in the mid ’90s when a girl in Red Bank, Monmouth County, struck her head on a pole while leaning out of a window to wave to friends, according to the state Department of Education. The death prompted changes so that bus windows now are not wide enough for a child to lean out.

Jim Wallace, president of the New Jersey School Bus Owners Association, said he feels the state is “ahead of the curve” when it comes to bus safety.

Wallace noted that all school buses are required to undergo rigorous state inspections twice a year as well as multiple checks by the driver and busing company themselves.

The issue of belting students into buses, however, can be a contentious one.

In explaining its decision, the agency said bus-crash victims typically are killed by impact with another vehicle or object and that in those circumstances “seat belts will not be effective in preventing the fatality.”

In a 2002 report, the agency noted that shoulder-lap belts would be effective in reducing fatalities but that mandating their use in buses would be expensive. “The benefits would be achieved at a cost of between $23 (million) and $36 million per equivalent life saved,” NHTSA stated.

In Thursday’s crash, the dump truck hit the bus in the rear driver’s side. The bus then spun into a utility pole.

Information has not been released as to whether the student who was killed or those who were critically injured were wearing their seat belts. In New Jersey, buses are only required to be equipped with lap belts.

While New Jersey law mandates the belts be worn, Arthur Yeager, co-founder of the National Coalition for School Bus Safety, said he believes many school districts fail to enforce it.

“The difficulty is that in general the districts have ignored it,” Yeager said.

However, a state education spokeswoman noted that, according to the School Transportation Supervisors of New Jersey, “the vast majority” of districts include proper use of seat belts on the school bus in their student discipline policies and procedures.

School bus drivers can write students up for failing to use seat belts. The students’ principals are then required to discipline the students according to the districts’ policies and procedures, the spokeswoman stated in an email.

Yeager’s coalition is of the opinion that seat belts would be beneficial in nearly all crashes. The coalition was among those petitioning the NHTSA for a federal mandate to require seat-belt use.

Yeager said it makes no sense that children are required to buckle up in their parent’s car but not in a bus.

“The first time that many children ride in a motor vehicle unrestrained, as ridiculous as it seems, is when they start kindergarten and get on a school bus,” he said.

While Dellinger said he believes that many students, especially younger ones, do use their seat belts, he said a driver can only do so much to ensure kids buckle up.

“They can’t make the kids put them on,” Dellinger said. “They are supposed to suggest it but they can’t force the kids to use them.”